The Ford-Cosworth DFV, The Inside Story of F1’s Greatest Engine

Students and fans of race engine technology will find Andrew Noakes account of the Ford-Cosworth DFV engine’s design, development and performance record a captivating observation of one of the greatest racing engines in motorsport history. 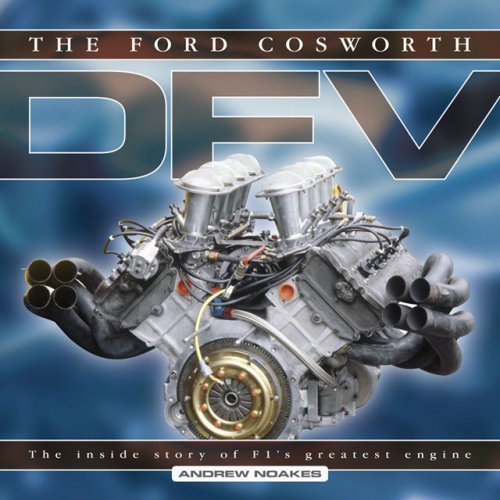 The Ford-Cosworth DFV won more than 150 Formula 1 races during its 17-year heyday which spanned the 1970’s and well into the eighties.  It also unseated the legendary Offy engine in USAC/CART Indy Car racing, particularly with the introduction of the turbocharged DFX derivative in the mid-seventies. DFV series engines also emerged victorious in endurance racing, Formula 3000 and hill climbing with unprecedented dominance before bowing gracefully with a final appearance in the 1987 Formula 1 series. 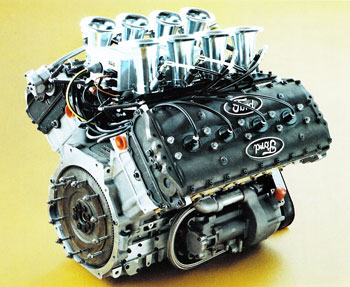 Few racing engines are blessed with victory in their very first appearance, but the flying Scotsman Jimmy Clark nearly lapped the field and set a new track record at the engine’s debut appearance in the 1967 Dutch Grand Prix at Zandvoort.  The story of Ford’s 1965 engagement with noted designer Keith Duckworth to design and build a legendary 3.0 liter Grand Prix engine is a fascinating tale and Noakes reveals it masterfully.  Of particular interest to engine fans is the lengthy description of Cosworth’s (Duckworth) design vision for the new engine. The four-valve per cylinder design dismissed the classic hemi combustion chamber as unsuitable for higher engine speeds due to excessive volume, slow burn characteristics and excessive surface area which reduces thermal efficiency. Noakes carefully reveals Duckworth’s evaluation of the chamber and port design and follows up with a detailed description of every internal component. Noteworthy commentary on rival engine configurations is also provided to show how the Ford-Cosworth partnership sought to build on known strengths while avoiding recognized deficiencies.

If you purchase this book to understand the intricate inner workings of a world class racing engine it pretty much delivers the goods.  The engine and its derivatives are described and illustrated with detailed explanations to support the how and the why of Grand Prix engine design. There is a lack of detailed internal photographs showing the hardcore internals of  DFV engines, but Noakes makes up for it with a stirring technical description of  Cosworth's design philosophy. Of further interest to racing engine fans are interesting technical references to other race engine designs and their designers in a well chronicled effort to sort out the progression of power.  Primary rivals included Ferrari, Eagle, BRM, Matra, Renault and Honda and the DFV had the measure of them all until changing engine regulations closed the door on its Formula 1 career.

Subsequent chapters detail the engine’s further development for USAC/CART racing and other racing venues and the engine’s record of achievement over its lifespan.  From 1966 to 1985 the Ford-Cosworth DFV won 155 races out of 267 entered; a 58% win ratio. Over the same period Ferrari won only 54. By necessity chapters are devoted to the complete record of DFV participation in all its documented races and the considerable influence of Ford’s director of public affairs Walter Hayes whose graceful manipulation of the entire process not only made it possible, but also supremely successful.

Noakes engineering background is evident and his carefully researched effort is a fitting tribute to one of the world’s most recognized racing engines. The book is lavishly illustrated with period color and B&W photographs revealing all the technical glory of the timeless Cosworth design. Readers who collect engine books for their technical significance and the sheer joy of learning about these mechanical masterpieces will certainly want to add the DFV story to their collection. The technical description of the engine’s internal workings alone is well worth the price.

·    Publisher: Haynes Publishing, Great Britain
·    Distributed in the U. S. by Motorbooks International