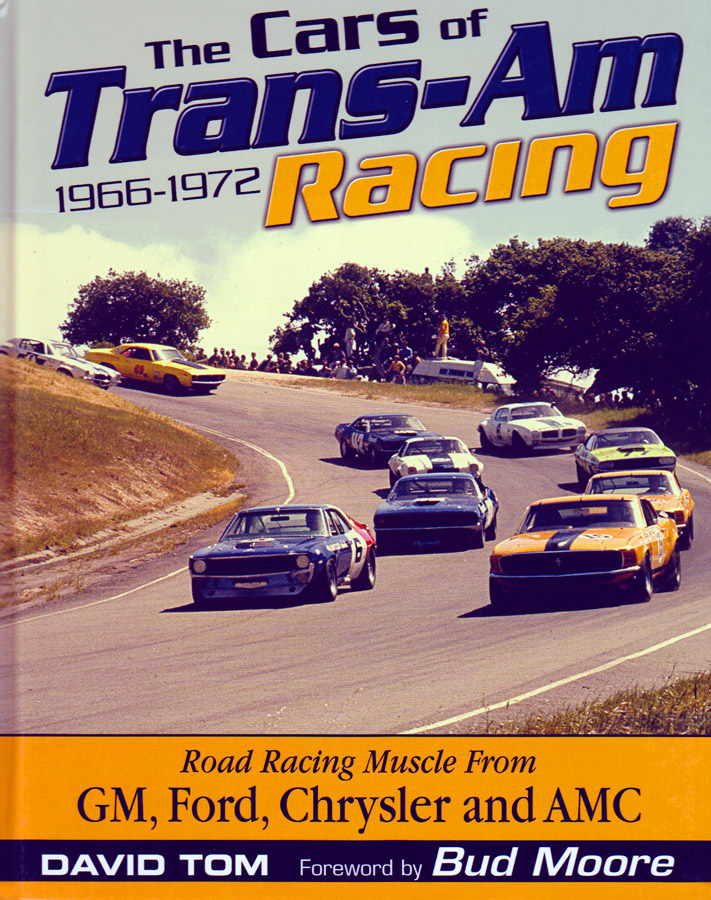 These were factory muscle cars and they weren't equipped with tube chassis and the sophisticated road racing suspensions we see today. They were modified to be sure, and packed with legendary hidden tricks to gain the advantage and it made for some mighty exciting racing.

Author David Tom is well versed in historical racing lore and in fact operates a web site dedicated to historic racing at www.racepast.com  As  the founder and registrar of the Historic Trans-Am Registry he is a previous owner of more than ten historic Trans-Am cars including Smokey Yunick's 1968 Camaro , the Chaparral Camaro of Jim Hall, and one of the 1968 Penske/Donohue Camaros.  He races and restores historic racing cars and is widely recognized as a historic racing authority.

Unlike other books on the subject of  Trans Am racing this one is devoted to covering the cars themselves and it does a good job of presenting most of them within their historical perspective. This is particularly evident in many of the great photos that Tom collected for the book. He guides the reader in chronological fashion through each year of the Trans Am series with detailed reporting on the evolution of the series and the ongoing development of the cars. Its easy to appreciate Tom's clear enthusiasm for the subject matter and the detail he tries to convey. Photographs of some of the original tech documents and spec sheets used by officials to check the cars prove interesting and he reveals a wealth of insider information about the cars and men who built them.

The known superstars are well covered and Tom does a great job of covering the many racers who are rarely mentioned. H e details the evolution of the series from a vehicle standpoint and shows how creeping sophistication and a good bit of factory induced "slight of hand" combined to turn poorly handling muscle cars into formidable performers in this highly original American road racing series. The book is highly recommended for any Trans Am enthusiast although as engine guys, we must take issue with some of the inflated power figures quoted for Trans Am series engines. 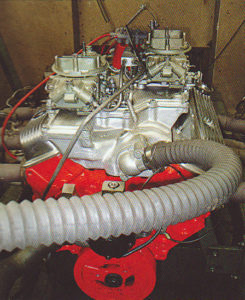 As part of our ongoing engine tech series we strive to produce features on original engines such as the legendary mystery motors that introduced the Chevy big block V8 in the early sixties. As such we are fortunate to maintain wide ranging contacts with many of the original engine builders and factory development engineers who actually did the work back in the day. So we are able to reference them regarding power numbers. The author quotes the original iron headed Z28 engines as delivering 480 HP with a single four barrel and nearly 500 horsepower with the Cross Ram twin four barrel setup. That's a tough chore for a 5.0L engine even today with modern aluminum heads, camshafts and induction systems, much less the early iron heads that couldn't move much more than  200 CFM at max valve lift even when they hogged out the ports. In another portion of the book the Traco engines are further quoted as making 440 HP which is about 35 more than we heard from the direct Traco source mentioned below. If this sounds like nit-picking it may well be, but given the contemporary trend toward over-inflating almost everything about the muscle car era it seems prudent to seek the truth and question where necessary.

To confirm our suspicions we contacted our old friend Billy Howell who was the one of the original Chevrolet development engineers on the Trans Am program and the factory carburetor tuner for the Penske cars. According to Howell, a really good single four barrel engine made about 425 HP and the Cross Rams made about 450 HP.  Those old iron cylinder heads were completely maxed out at those power levels. The author also quotes these engines as revving to 8000 rpm, but Howell says that connecting rods limited them to a max of 6800-7000 rpm and over revving was a problem for many drivers. Hence the rods and not the valvetrain were the real limiting factor. If any of the engines revved to 8000 rpm they certainly made no power up there and likely didn't survive long.  Some of  Traco's original dyno sheets confirm Howell's comments. We checked further with Traco's Gordon Chance who told us that their engines made only 400-405 HP at 6800-7000 rpm. He also told us that the factory Z28 engines that came in the street cars were good for about 360 HP.

Howell and Chance provided a wealth of information that we are compiling into an upcoming story and we certainly don't mean to detract from the quality of  Tom's book. The author may have received some bad information or information tainted by the power output of modern vintage engine restorations that take advantage of newer technology. We don't have direct access to any of the Chrysler or AMC information, but we feel the Ford numbers are also a tad suspect based on copies of original dyno sheets we have seen and als0 a dyno test of a Bud Moore 302 Chevy evaluation engine where the published numbers do not mathematically calculate correctly between the quoted torque and horsepower figures, particularly at max rpm where the engine is said to have entered valve float. 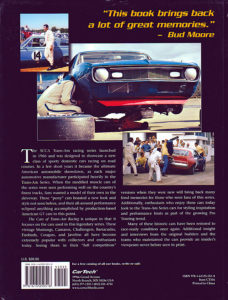 Questionable power figures notwithstanding, Tom's book does a fabulous job of revealing the inner workings of the Trans Am cars and all the factory and team shenanigans that went on as the teams juggled for what Donohue referred to in his book as the unfair advantage. With a Foreword by racing legend Bud Moore, it delivers plenty of racing details.  If you love Trans Am cars and Trans am racing you will love this book. The photography and detailed historical information are well worth the cover price and the production value is second to none. It is beautifully laid out, but suffers to some degree +from a seemingly rigid design that is locked into a two column format. Many of the photos are too small to really show the details enthusiasts love to examine. There are plenty of photos that would greatly enhance the value if they were run larger. In many cases a full page width photo is well warranted. Despite these small criticisms, you would be hard pressed to find a  nicer book about the subject. It makes a fine addition to any racing library.