The Boys of Bonneville DVD 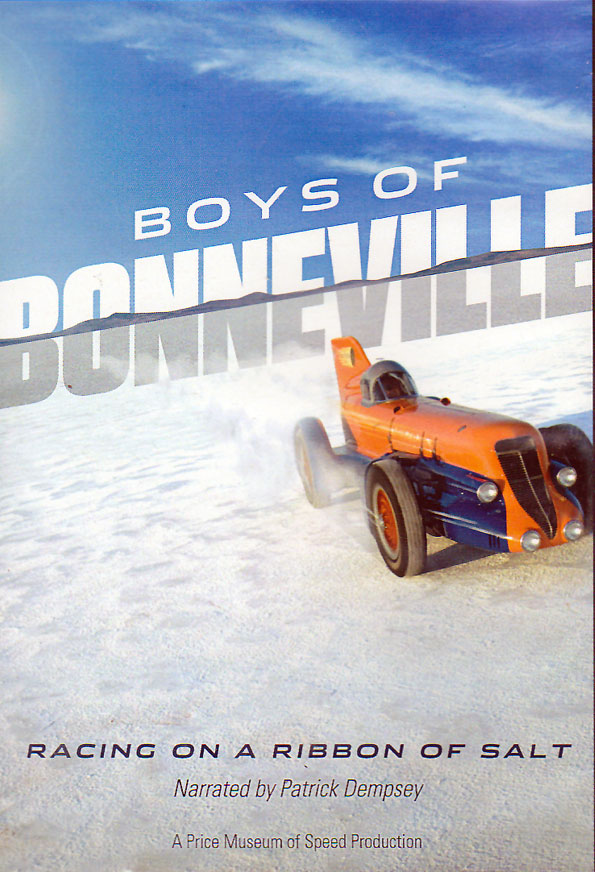 For the uninitiated it’s almost impossible to comprehend the enduring significance of Ab Jenkins to the greatest of all race tracks, the Bonneville Salt Flats. Almost single-handedly, Ab Jenkins established the remote salt flats as the most desirable surface on earth for land speed record and endurance record racing. Narrated by veteran actor and sports car racer Patrick Dempsey, The Boys of Bonneville is a compelling documentary film about a man whose passion for racing and record breaking set the stage for an unprecedented century of racing the likes of which had never been seen or even imagined.

Produced by former United States Ambassador John Price now curator of his own racing museum in Utah, the film is a gripping account of an obscure and too little recognized period in land speed and endurance racing. Price purchased and restored Jenkins’ iconic Mormon Meteor III race car for his museum and was duly compelled to set the record straight about Jenkins contribution to racing history and particularly the Bonneville Salt Flats. Land speed racers revere Jenkins one and all and Price would need all of his ambassadorial skills to faithfully retrace Jenkins steps, revealing the man, the son, the legend,  the godfather of Bonneville. He succeeds.

Jenkins was a devout Mormon dedicated to his family, his love for speed and the stately grandeur of his home state of Utah. Painfully honest, he never drank, smoked, lied, cussed or mistreated a single soul, made friends everywhere and believed in applying his god given talents for the greater good, the advancement of land speed racing and the promotion of the Bonneville Salt Flats as the greatest natural race track ever discovered.

The ironman of endurance racing, Jenkins discovered the salt flats by motorcycle while still in his youth and immediately recognized its potential for high speed driving. Priceless (no pun intended) original B&W film clips reveal the pleasant mannered Jenkins’s rise to prominence as the premier automotive test driver and record setter of the early twentieth century. The viewer is treated to remarkable car to car and aerial views along with what may be the first in-car camera views of high speed driving on the salt flats. Jenkins raced day and night; sometimes up to 48 hours straight and the film reveals his staggering endurance with an astonishing amount of period footage that few even knew existed. Whether he raced for sponsors, employers or himself, Jenkins never gave less than maximum effort. Many of his records still stand nearly a century later. 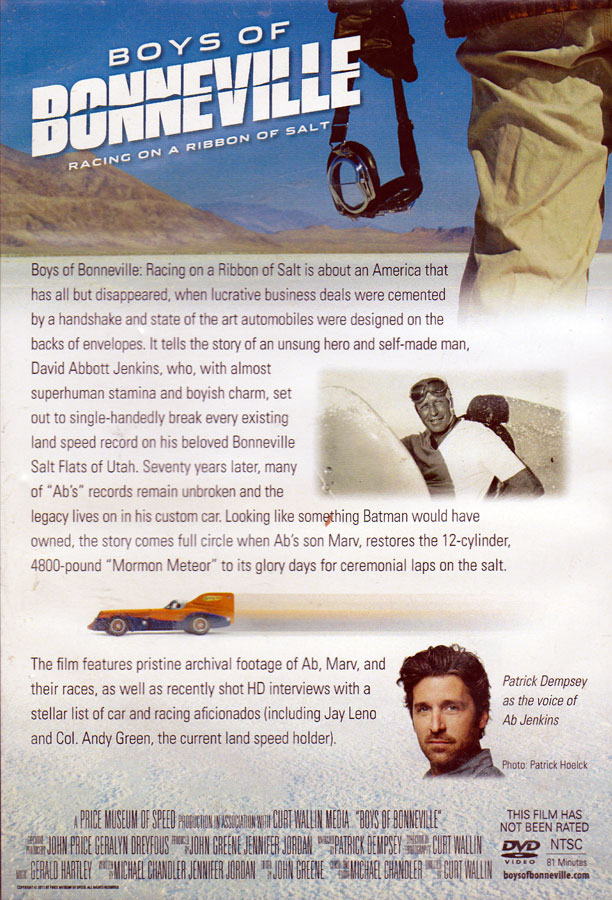 As the film progresses viewers are rewarded with an inside look at Ab Jenkins visionary love for the salt flats. It follows his career as a test driver and record setter and chronicles his tireless efforts to lure contemporary land speed heroes like Malcolm Campbell, John Cobb, George Eyston and others to Bonneville to set impossible speed records that still stagger the imagination to this day. Jenkins tireless efforts ultimately lured young California hot rodders who in 1949 began racing and establishing class based records in earnest. These racers have preserved his dream, nurtured it and molded it to the vision Jenkins recognized more than thirty years earlier. Today they have established an ongoing progression of speed records unrivaled in all of motorsports. This is perhaps Ab’s proudest achievement and the cornerstone of his legacy.

We are blessed with personal glimpses of the close relationship between father Ab and son Marvin as we follow their record breaking activities and later sad decline as state officials failed to live up to agreements to preserve and display the Mormon Meteor for public enjoyment. The human element of the film centers on Marvin’s efforts to preserve the car and Price’s extraordinary restoration completed one day too late for Marvin to once again enjoy the freedom of unlimited speed on their beloved salt flats. Price spared no expense in the production of this story and the restoration of the car. Viewers will experience the ups and downs, successes and few failures of the Jenkins saga and come to respect the enormous contribution of Ab Jenkins and family to land speed and endurance racing and the enduring reality of record racing at Bonneville courtesy of Ab Jenkins. Reviewers and self anointed critics may nit-pick the details but I for one thoroughly enjoyed this film and felt that it appropriately honored Ab for a record setting life and a racing legacy few can match. − JB

Amazon.com
Buy This DVD on Amazon