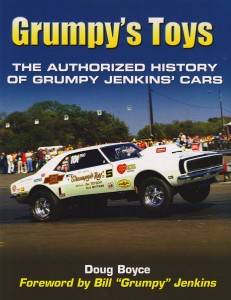 Grumpy's Toys offers a long overdue examination of drag racing legend Bill "Grumpy" Jenkins and the 17 Chevrolet race cars that bear one of the most famous names in drag racing. Author Doug Boyce delivers a fascinating and surprisingly personal look at “da Grump’s” extraordinary career and the legendary cars that represent one of drag racing’s most influential figures. Beginning with the memorable partnership between Jenkins and Dave Strickler in the early sixties, readers are treated to an exceptional photo essay of Grump’s famous racers and a concise supporting narrative that highlights the enormous significance of Jenkin’s contributions to the sport of drag racing. His behind the scenes efforts at writing rule books that formed the backbone of modern day drag racing are revealed for the first time and readers will be amazed at the influence he exerted despite frequent and famous clashes with the drag racing hierarchy.

Strickler’s Old Reliable Chevys, tuned by Jenkins are thoroughly dissected with supporting commentary from Jenkin’s himself and a treasure trove of historical photos provided by Strickler’s family. These include the 348 and 409 powered cars that became dominate drag racing legends from 1961-1964.  Following in chronological order, the book explains the switch to Chrysler products and the Dodge Boys cars when Chevy initiated the no racing ban. Many fans are unaware of Jenkin's early involvement with Chrysler products.  The A990 Hemi powered Black Arrow Plymouth brought Bill his first NHRA Championship and  his only non Chevrolet national event win. In subsequent chapters the Black Arrow Plymouth, the giant killer Chevy II's, factory supplied Camaro's, Vega's and Monza's are all revealed in detail along with their racing history. 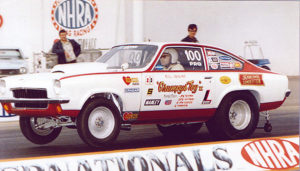 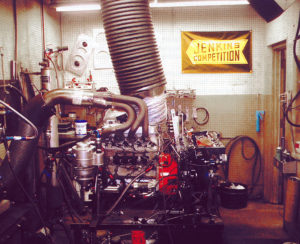 Jenkins Competition dyno room: where all the magic happens!

Jenkins racing exploits are legendary and author Boyce covers them all in candid detail. Those who know Jenkins as the master engine builder will be disappointed to find little about his engine building prowess and his remarkable contributions to small block and big block power. Jenkins always seemed to by 50 horsepower ahead of all his competitors and his tuning innovations and a more thorough mention of his engine R&D programs would have been nice. Those who recall that the Jenkins small block book by Larry Schreib was the groundbreaking first publication from CarTech's S-A Design series would no doubt appreciate a retrospective look at Jenkins engines from the inside. With all of Grumpy's extraordinary exploits, there just wasn't room and those of use who still own dog-eared copies will continue to treasure them alongside Boyces' wonderful new chronology of Jenkins' epic career.