by Speedy Bill Smith with Dave Argabright
The world of racing and high performance is surprisingly full of industry icons; colorful men who started with next to nothing and built performance industry empires through sheer grit, determination and passion for cars and racing. Men like Howard Johansen, George Hurst, Ed Iskenderian, and many more formed the core of America’s hot rodding movement and among them Speedy Bill Smith stands as tall as any. 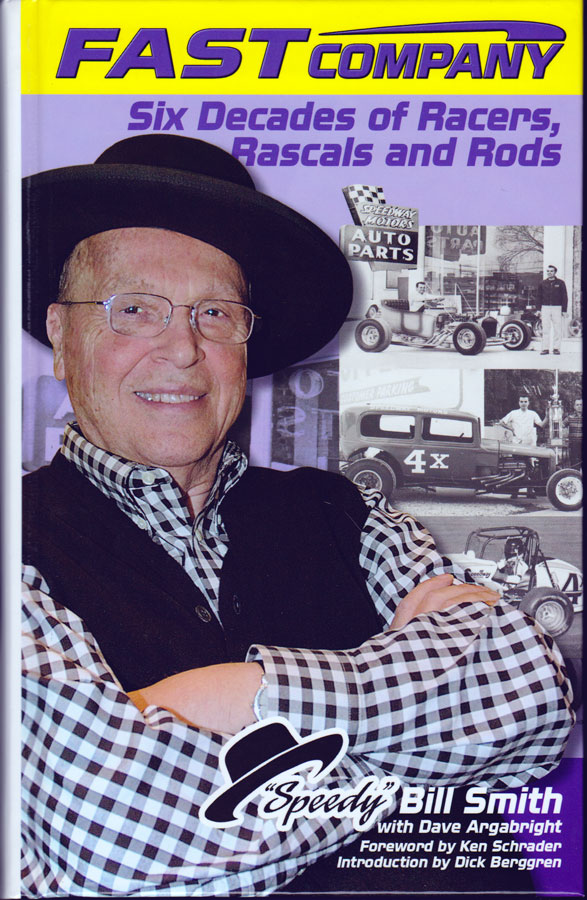 Those in the know recognize him as a tough racer, a dedicated hot rodder, proficient businessman and the founder of America’s oldest and most prestigious speed shop, Speedway Motors. You’d be hard pressed to find a rodder or a racer anywhere who hasn’t bought a piece of speed equipment from Speedway Motors over the last six decades. Few people of note in the performance industry have not met, raced against or done business with Bill Smith. And no matter when or where you might have met him, he’ll remember you like it was yesterday.

Now Bill has teamed with award winning author and columnist Dave Aragbright to tell his life story with all the fascinating details that have made Speedy Bill and Speedway Motors legendary representatives of a multi-billion dollar industry spawned in the fading shadows of WWII and groomed through the meteoric rise of technology that characterized the second half of the twentieth century. If you remember the first time you and your buddies dragged home a discarded flathead or maybe an early hemi and tore it apart in your dad’s driveway you can easily relate to the forces that motivate Bill Smith.

A car guy from birth Speedy Bill was raised in an era where parents taught and demanded respect, hard work and responsibility. Bill is all that and he’s one tough customer too. Now eighty years plus, Bill is still hard on the gas, having survived a lifetime of serious medical setbacks, racing accidents, lean times and more on his amazing journey. You may recognize racing greats like Jan Opperman, Doug Wolfgang, Lloyd Beckman and Tiny Lund. All of them and more drove for Speedy Bill and they beat the best in the business with car’s designed and built by Bill. In the early days Bill was not only a speed shop owner, he was a track promoter, flagman, tire changer, engine builder and anything else that would further his racing endeavors. Bill loved to win and he worked hard at it.

The book leaves nothing out. Bill describes the early days, the lean times and shaky business decisions that backstopped his racing efforts. It’s more than just a recitation of events as Bill recalls them. It’s a tell-all revelation of Bill’s life including everyone he’s ever raced against or dealt with in the racing and high performance industry, everyone that he loves and a few that pissed him off too. We used to call it the speed equipment industry and somehow that’s still more fitting than the contemporary monikers the industry has taken on today in its quest for legitimacy. Speedway Motors is a major powerhouse in the performance and racing industry, but in Bill’s mind it’s still a speed shop and that’s the way he likes it. While recognizing and successfully applying present day business models, Bill has managed to retain the flavor and all the gritty character of the early days of hot rodding. Customer’s no longer install their speed parts lying in the dirt out behind the shop, but one suspects it’s a practice that Bill would still tolerate where car guys and hot rodders are concerned. 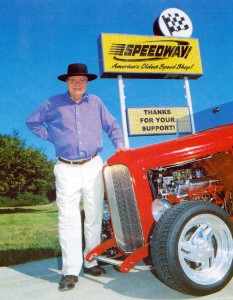 The heart of the book reflects years of tough dirt track racing with all the racing lore that makes you wish you had been there. The stories are legendary and Bill shares all the murky details. Almost everyone has driven for and quit Bill at some time or another. Some returned, some didn’t, but the racing moved on and winning was Bill’s primary focus. Still within the pages one can sense Bill’s love and concern for many of his friends, drivers crew chiefs and others that populated his life and spectacular racing career. One can also perceive his reverence for the significance of discarded cars, engines and other memorabilia that meant so very much back in the day.

Much of that is reflected in the incredible Smith Collection Museum of American Speed, perhaps Bill’s proudest accomplishment next to Speedway Motors and a lifetime of winning races as a car owner. Bill recognized the value of preserving Americas racing heritage and he has assembled the finest museum of racing and hot rodding in the country. It’s a must see for anyone passing near Lincoln, Nebraska and well worth an overnight stay. Bill goes to great lengths to recognize the significance of those who helped make it happen starting with his wife Joyce and his four sons. No one goes unrecognized and that’s a testament to Speedy Bill’s stalwart character. While it’s generally pretty tough for hot rodders and racers to pick up a history book, this one’s different. There’s nothing you can’t relate to in this book and that’s because Speedy Bill is one of us. This is bench racing at its best because Bill has so much to tell us. And given the right circumstances, he likely wouldn’t pass up a chance to come and sit on a tire in your garage and swap lies with you. Only in Bill’s case it’s all true. How about you?

A few of Bill and Speedway Motors Achievements