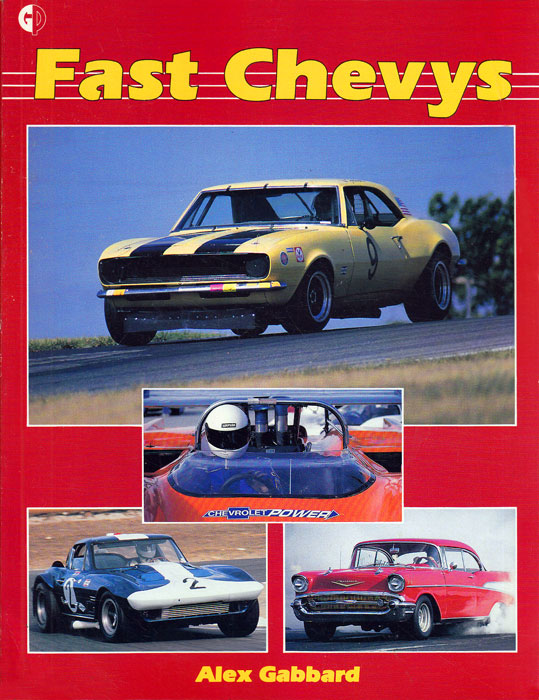 It’s not normally our policy here at hotrodenginetech.com to review books no longer in print, but occasionally we have to give a shout out for a book that still deserves a place on your bookshelf strictly for the historical value of its content. Some books are destined to preserve the historical record, particularly those with first-hand accounts from original sources such as the specific Chevy engineers and racers who designed and raced legendary Chevy engines back in the day. Why is this still important?

Well for one, because to a remarkable degree we (collectively) have unwittingly oversold much of the factual record about the muscle car era, horsepower ratings, performance records and not surprisingly engine content. The fading clarity of nostalgic hindsight has effectively clouded our judgment in the name of how great we thought things were versus what really happened. In our zeal to relive the glory days we have inadvertently convinced ourselves that things were better than they were; point in case, the Chevrolet 348/409 W-motor. The legendary 409 Chevy and the 427ci RPO Z11 package were performance upgrades from the 348ci W-motor originally designed as a truck motor with reasonable application in heavier passenger cars. They are revered today both in song and legend as awesome engines. And in fact this writer recalls high school years watching 409ci Chevys duke it out with 406ci and 427ci Fords and 413ci and 426ci Mopars. All very exciting stuff when you are 17 years old. But once you read the comments from the original engineers and designers you come to realize how primitive the W-motors were in comparison to the later Mark IV big blocks. 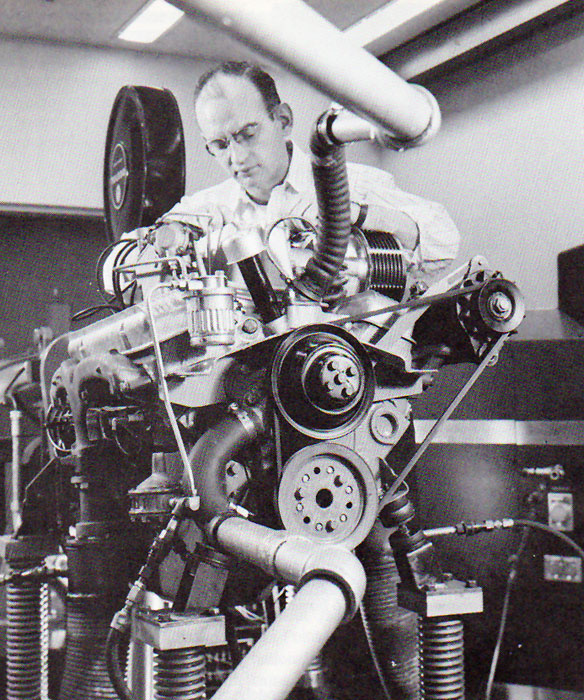 Through extensive interviews with designers like Dick Keinath, father of the modern big block and the test engineers and designers like Fred Frincke, Bill Howell, Zora Duntov and others you get a better picture of the engine compromises that were made and how the results were shuffled to achieve success. According to Keinath, the W-motor was designed from the get go as a big truck engine that evolved to a racing engine. Designers saw what was wrong with it and switched strategies. Mark IV series engines were originally designed as racing engines (the Mark II Mystery Motor) and were subsequently revised for car and truck service. The difference was considerable as the Mark series was designed for much higher efficiency than the W-motors.

There is a lot of misinformation about the Mark II Mystery big block that qualified on the pole at the 1963 Daytona 500 and ran practice laps up to 10 mph faster than the rest of the field.  It’s been called a modified W-motor with new heads. In the face of all logic some internet gurus claim it was a W-motor short block with new super racing heads. And the speculation continues to this very day in forums where anonymous experts pontificate on Chevy engine history. Well, nothing sets the record straight like the inside scoop from the guys who originally designed the engine and the engineers who tested it and developed it and that’s what you’ll find in Fast Chevys. This book contains the official “last word” on this and many other subjects of Chevy racing lore. 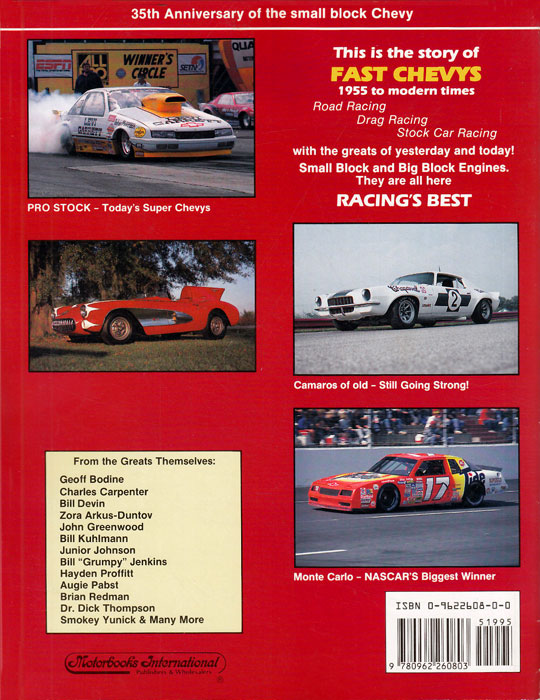 Considering the Mark II big block again briefly, Keinath explains that the only thing even closely resembling the W-motor design was the crankshaft. The Mystery engine began as a 409ci engine based on the all new Mark II cylinder block and it utilized a 409 crankshaft and bearings; nothing else. Keinath states that it had a 4-5/16-inch bore (4.3125) and a 3.500-inch stroke which yielded 409ci. It was a racing engine designed to ultimately replace the 409 and the displacement was retained to capitalize on the 409’s notoriety.  Much of the testing and development was done with 409 cubic inches, but in October of ‘62 negotiations with NASCAR resulted in permission to take it to 427 cubic inches to gain parity with Ford and Chrysler. This development package became the Mark IIS (for stroked) New cranks were designed and that eliminated the 409 crank from the package. Keinath further remarks that the Mark II and later Mark IV series engine are externally almost identical, but that nothing interchanges primarily because of revised port locations; head bolt locations and so on.

And that’s just the tip of the iceberg. The original Mark IV 396 required a reduction in bore size to accommodate casting issues at the foundry and it required a stroke increase from 3.65 to 3.76-inches. Keinath suggests that the 396 displacement came about because of NASCAR limiting displacement to 6.5L about then and because there was initially corporate pressure to stay below 400ci. Despite this engineers eventually matched the 427’s power level with the 396.

That’s just about 2 percent in a nutshell of the historical Chevrolet information contained in this book. No book before it and none sense has done the research and investigation with the original players to get the straight story. The book contains similar information and interviews regarding the original Z28 program, Can Am big blocks, Corvette racing engine, Zora Duntov’s entire wild experimental engines and on down the line. It’s the most comprehensive and correct history book you’ll find on Chevrolet engines and racing programs.  Get the rundown on stuff you’ve likely never seen such as the 545 HP SOHC small block development engine or Duntov’s fully developed DOHC small block heads. And then there’s the SOHC, oval port 427 big block with 660HP. And there’s plenty more where that came from.

The book is a little light on drag racing coverage although Zora Duntov relates his efforts to develop parts and pieces for drag racers and the end of the book does discuss drag racing to some degree. The bulk of the book describes Chevrolet in NASCAR and sports car racing where Corvettes became dominant. And Bill Jenkins describes his drag racing program from its inception. There’s plenty of interesting and entertaining reading here for all Chevy enthusiasts. If you want to sound knowledgeable about Chevy racing history and the development of famous Chevy engines, this book is a must read. As previously mentioned, it is now out of print, but still widely available through the internet and used book stores. And here’s a tip. Don’t bother looking for it on Ebay. Sellers have jacked the price sky high. Instead, do a simple search on Amazon and you’ll likely find it for less than five bucks from a large variety of Amazon affiliate bookstores. Who cares if it’s used? Dog eared copies of books and magazines are perfectly in character for most hot rodders. After all, it’s the content that counts. Author Gabbard reveals a gifted talent for relating the facts in a thoroughly enjoyable way. Best of all, he sticks to the facts and lets his subjects tell the story; the essential mark of a quality interviewer.

And stay off the internet forums unless you’re looking for laughs. Some guy in his underwear at 3 AM is likely not qualified to provide knowledgeable comment on the history of Chevrolet engine design. Get your copy of Fast Chevys today and stay up all night reading the real history of Chevrolet performance as told by the men that actually created Chevrolet’s legendary high performance engines. You’ll be glad you did.