Harold Bettes is a widely respected engineer who spent the better part of his career making SuperFlow Corporation one of the premier engine and chassis dyno testing companies in the United States. He is the default master of ceremonies for the annual Advanced Engine Technology Conference (AETC), a comfortable and prolific speaker, gifted engineer and a very personable and approachable individual. 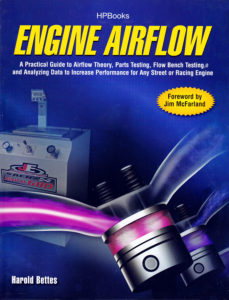 He is also a highly accomplished teacher adept at conveying difficult concepts in simple terms. That’s why his book Engine Airflow is recognized as one of the definitive works on the subject.

Bettes’ comfort with advanced math is clearly evident, but it doesn’t prevent him from explaining engine airflow in clear concise terms that a layman can grasp. Give Harold a white board and a colored marker and he’ll walk you through airflow concepts with a casual ease that overcomes even the most resistant minds.  Practical application is a cornerstone of his descriptive narrative. He never strays too far from how the physics and math of airflow actually translate into functional air motion that improves horsepower.  Distilling theoretical concepts to plain talk for ordinary people is characteristic of Harold’s easy going delivery.

In this book he sets the stage by briefly describing all the major engine components and their relationship to engine performance.  Then he fully describes the primary players such as volumetric efficiency, CFM, friction horsepower, manifold pressures and so on. From there he describes how air flow benches work, what they can and can’t tell you and how all the specialty support tools are used to examine and understand any particular cylinder head’s capabilities. There’s math involved, but more importantly there is Harold’s smooth revelation  of how these tools show you what a port is doing and point the way to improving it. 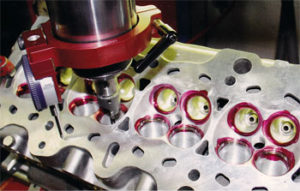 He continues on to explain flow testing of intake and exhaust components within the cylinder heads and then the induction system from carburetor entry to port entry exiting the manifold. Along the way he explains the math so you can see how it describes what is happening with numbers collected as data. Selecting camshafts according to flow data is fully covered and again he describes it in simplistic terms that won’t cross a novice’s eyes.

Among the many performance books available for engine students and builders, Engine Airflow remains a cut above in terms of value to the reader. You probably don’t know everything there is to know about airflow if you haven’t read this book. You won’t know it all afterward either, but you’ll know ninety percent of it. The rest is up to you to figure out through what you’ve learned and the data you generate and evaluate from your own projects.  And when you do you might want take a brief moment to say ”Thanks Harold”.

Buy this Book on Amazon