Despite an abundance of “How to Build Big Block Chevy” books populating the internet and local book stores, there are still valuable opportunities to learn something new about extracting power from big block Chevy engines. And who better to learn it from than Tom Dufur, a champion drag racer who has won the K&N Super Eliminator Championship twice with his big block powered Super Comp dragster. He also served as a former tech editor for both Car Craft and Drag Racing magazines before settling into a 24 year position with the Edelbrock Corporation. Suffice to say he has thrived on the leading edge of big block Chevy performance development for many decades and no doubt knows a few secrets. 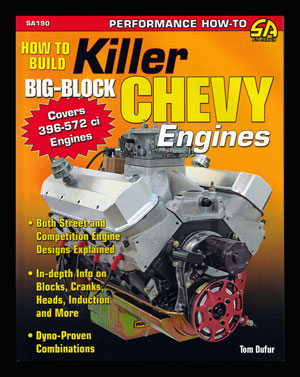 From hot street engines to all out Top Dragster engines Tom has seen the best there is and he passes it all along in this hardcore book that reveals the Chevy engine building tips and technique that have helped him win two championships while riding the crest of high performance engine development during his tenure at Edelbrock. You’ll find in-depth information about the best blocks, cranks, rods and pistons to build a killer short block and then read about the latest cylinder head prep techniques for all out power and performance. This book starts out defining the Chevy family tree of big blocks and carries you right on through to a righteous 1000 HP-plus 598 cubic inch single four barrel monster. All the basics are here and Dufur leads you effortlessly through it all while distributing all the appropriate tips and tricks along the way. Learn about the best ring packages and various new valve train and firing order options that can give your big block the extra kick you’re looking for. Learn new crankshaft and bearing secrets? And how about induction system mods that help you take maximum advantage of complementary parts such as properly sized carbs and headers?

This big block book is a little different in that it explains the reasoning behind each modification in detail and helps you visualize how the sum of the right parts delivers superior performance when and where you need it for your application. If you’re agonizing over which big block book will give you the best bang for the buck, we advise you to toss your cash in this direction and save a bundle on the back end by learning how to choose and assemble the right parts from the beginning.

Buy This book on Amazon...