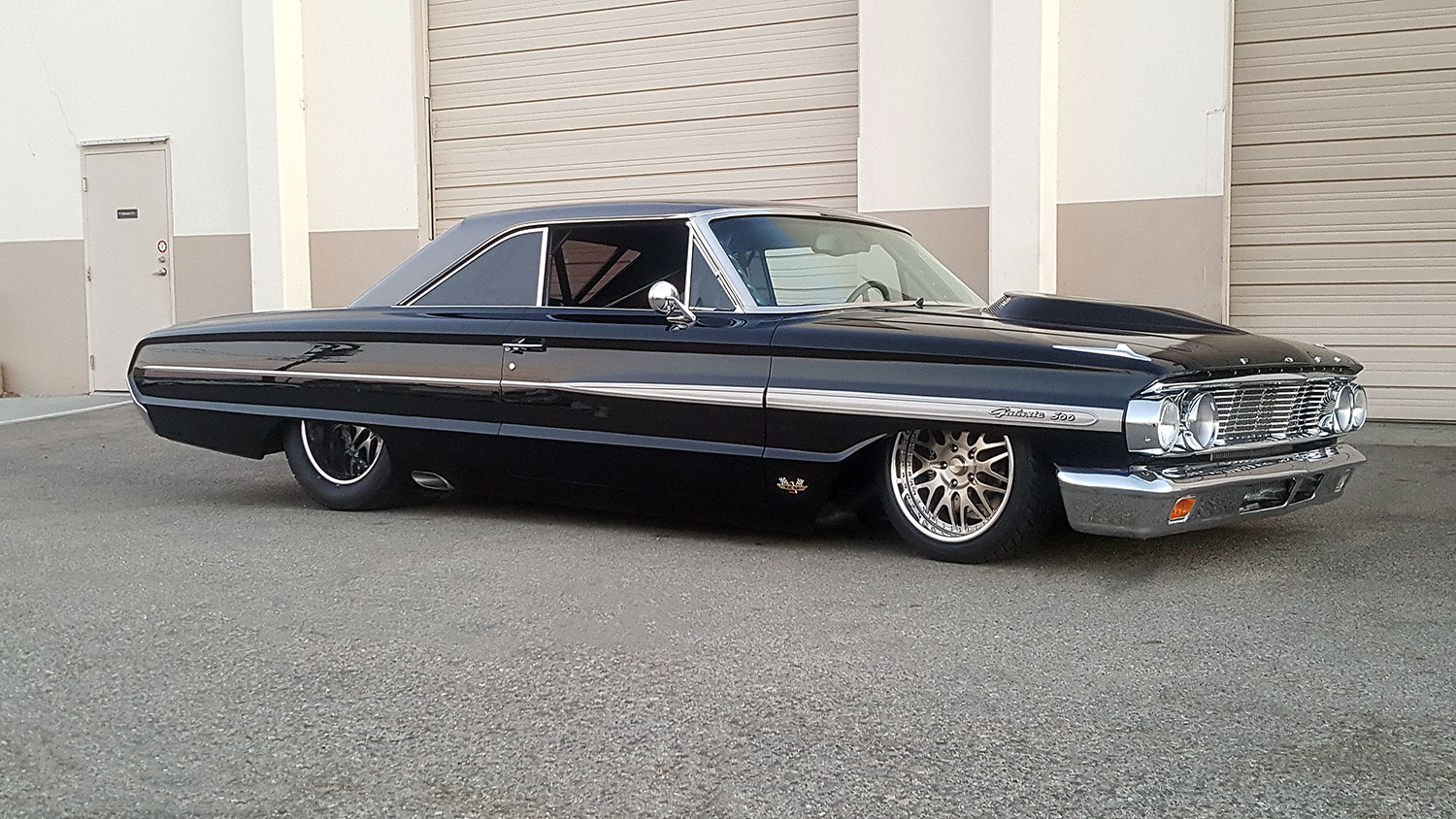 Bones Fabrication in Camarillo, CA has pulled off another stunning creation with Jim Ring's 1964 Pro Street Galaxie 500. Perhaps best described as a whole lot of in-your-face subtlety, this boulevard bouncer is in fact a rolling testament to good taste in car creation. It sports just the right amount of stance and muscular attitude to let you know it means business without resorting to the usual tricks like rear wings, mile-high blowers and other look-at-me paraphernalia. As noted in our previous build-up stories (engine) (car), it packs 482 cubic inches of Kenny Duttweiler built, turbocharged deathstar power ready to reverse rotate the planet at the blip of the throttle. 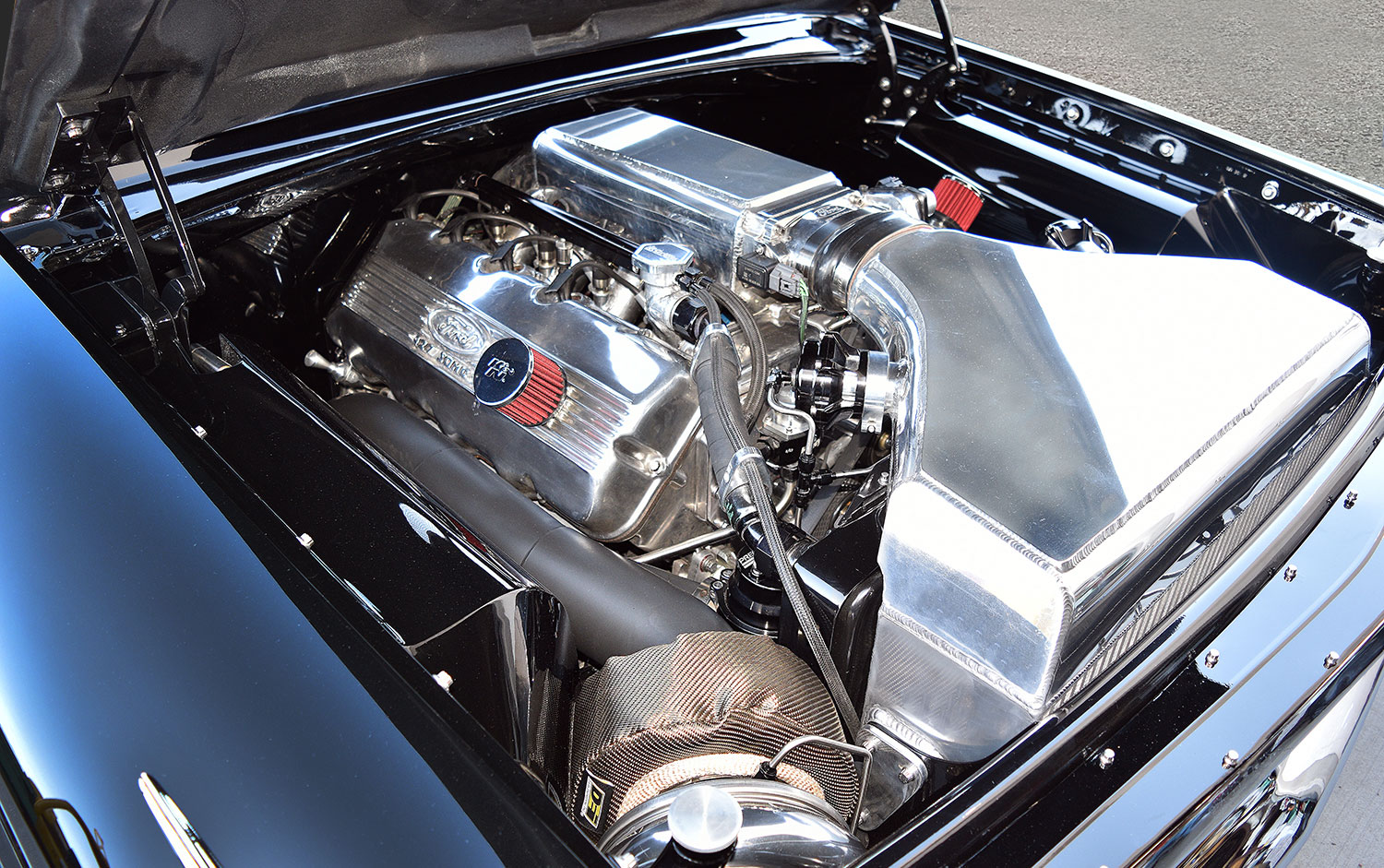 The muscle behind Ring's Pro Street vision is an all- aluminum 427 Ford Cammer punched and stretched to 482 cubic inches and force-fed by a pair of 76mm Precision Turbos. And it all fits under the hood, sorta. Hood clearance was not an issue, but an obligatory nod to bygone days called for an original style AF/X Teardrop Bubble Hood Scoop to keep it real and conceal the WMD between the fenders. The turbochargers and Holley Terminator EFI system make it possible to create a mean sounding yet mild mannered street configuration capable of converting to superhero status on demand. 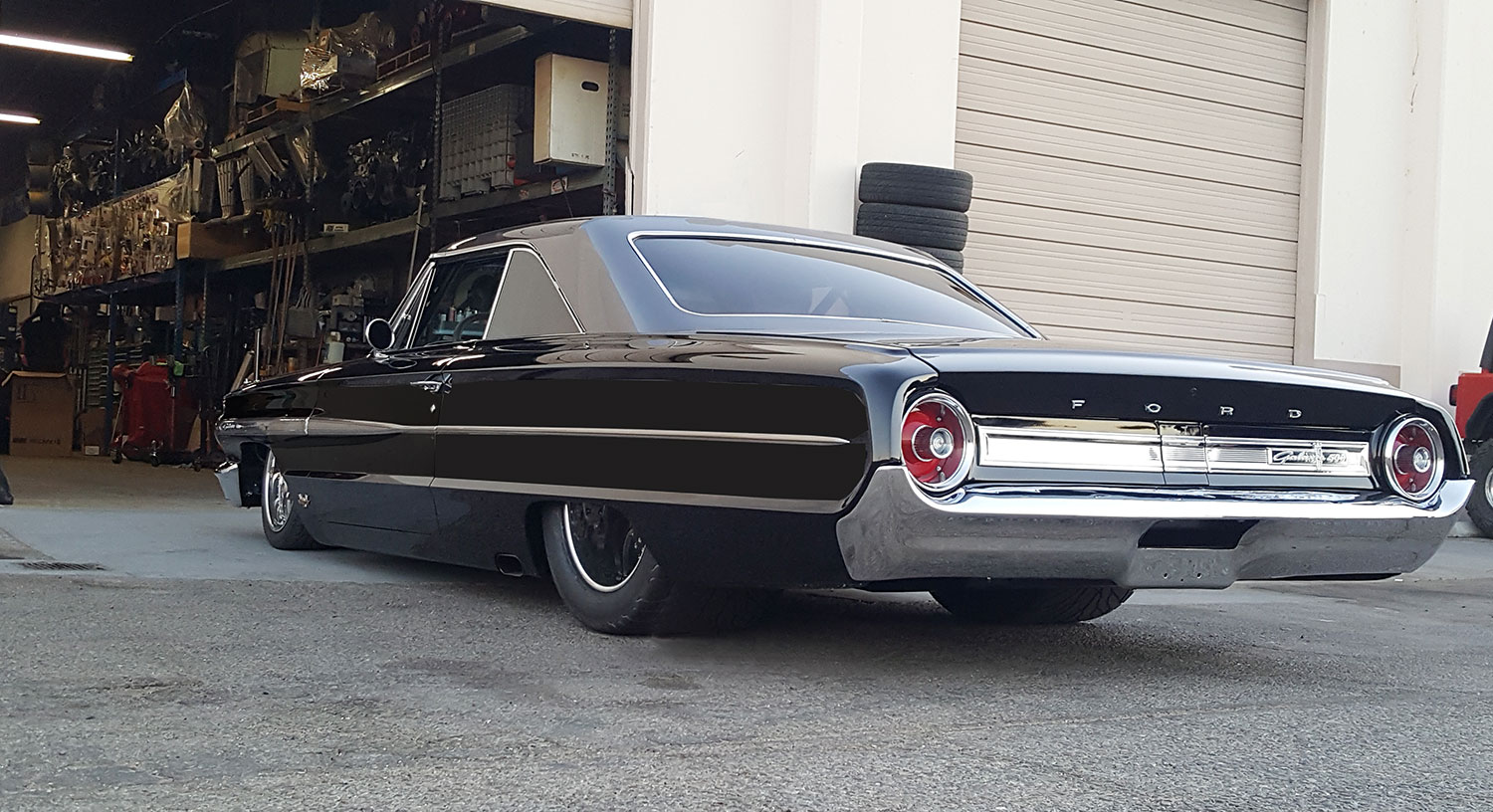 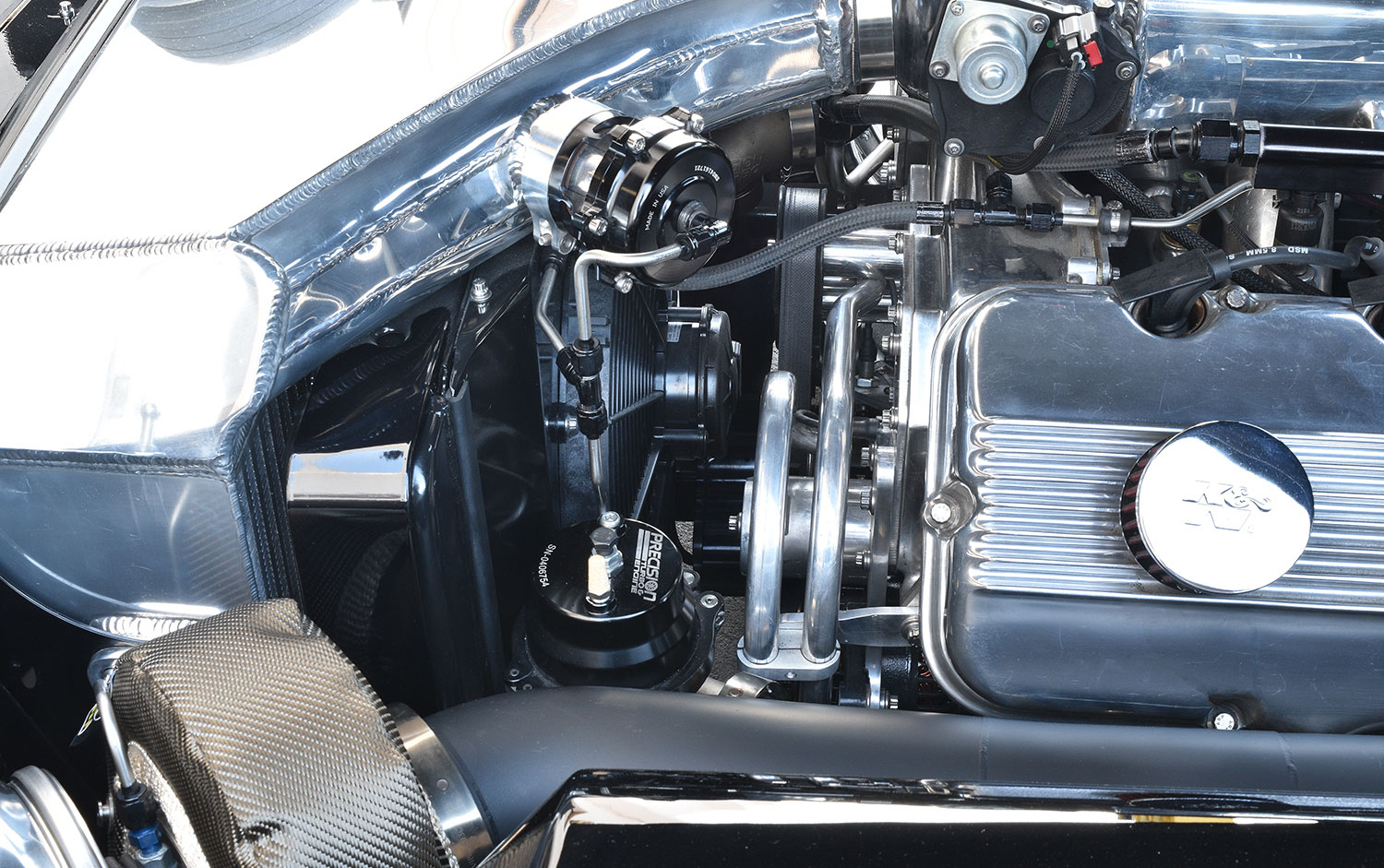 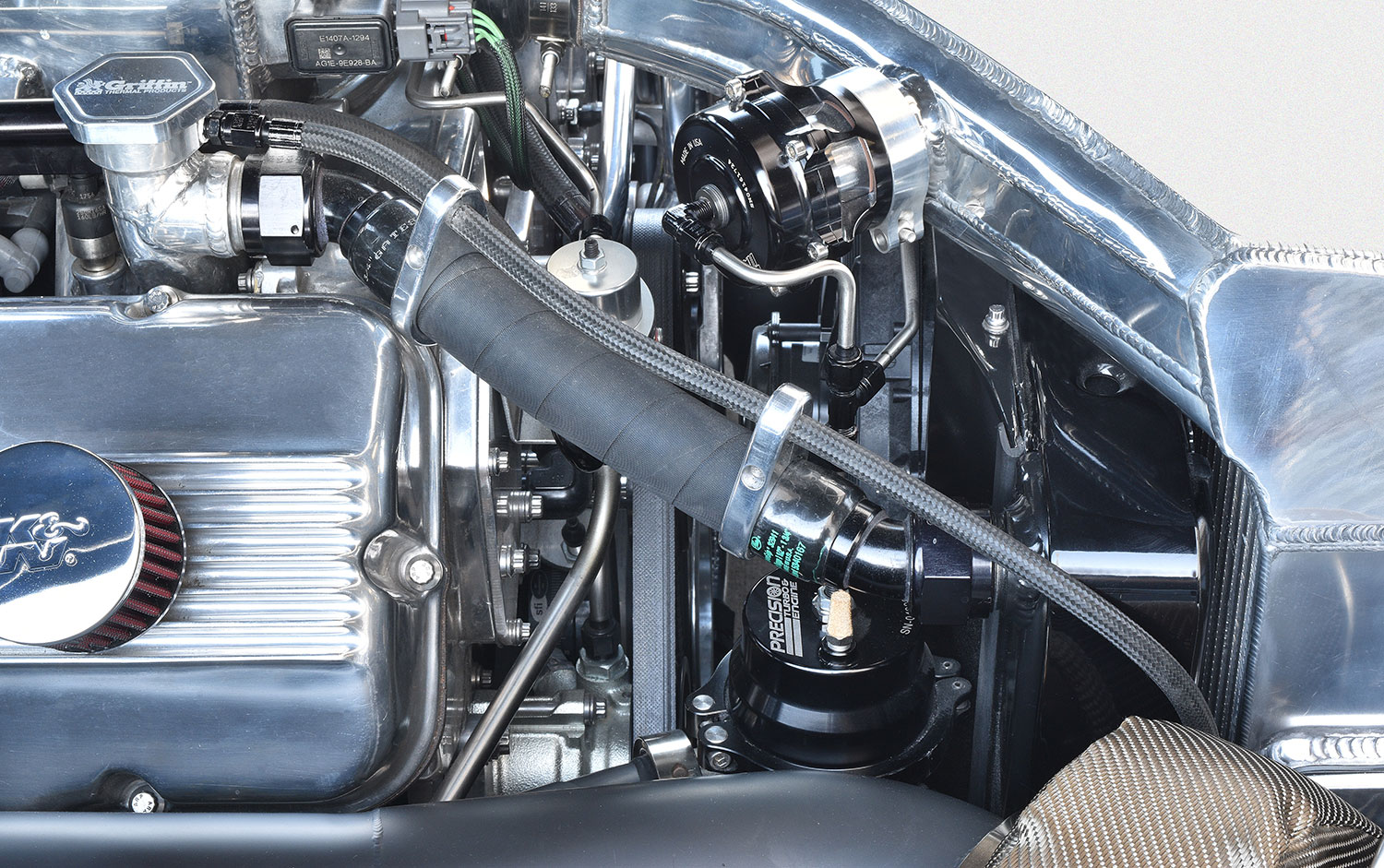 They say the devil is in the details and this Pro Street beast has got details aplenty. It is built with the premise that you should actually be able to drive it anywhere without overheating and without having to rely on fuel additives. Turbo exhausts do run near the valve covers, but engine compartment airflow dissipates the heat adequately and the turbo heat shields help hold heat in the turbos while preventing it from radiating to the engine compartment. The cooling system is oversized to work inn concert with the massive intercooler and the front dress components are perfectly aligned for reliability. 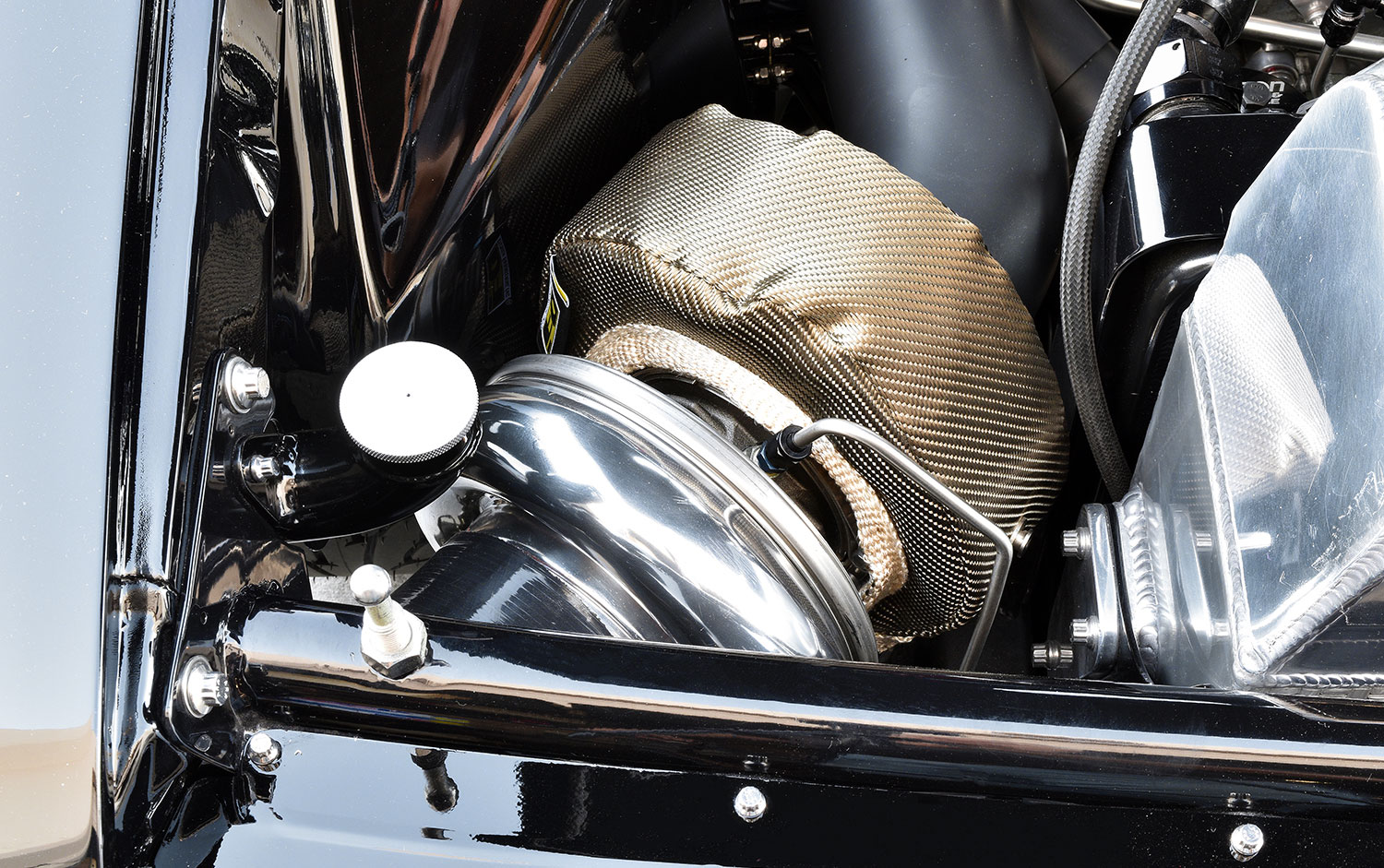 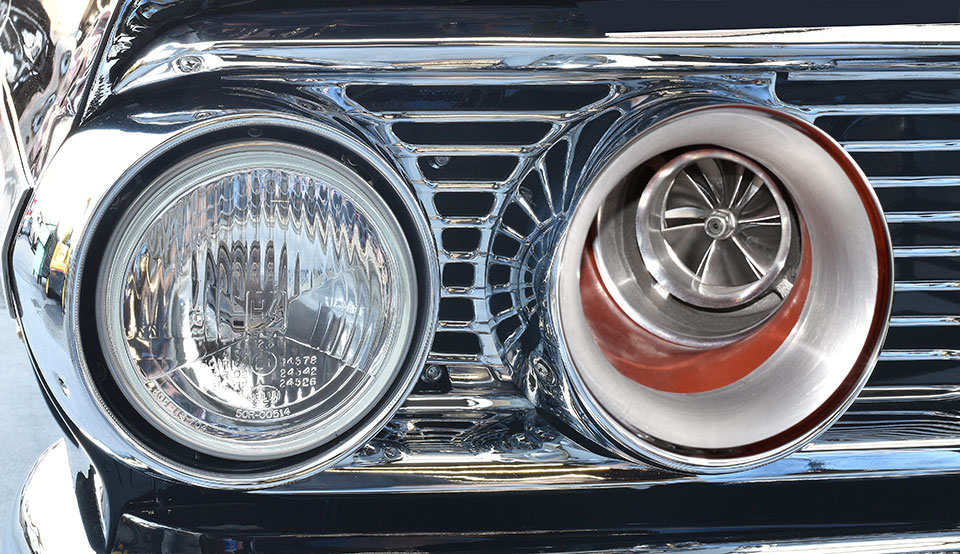 The jury is still out on how to protect the turbo inlets. Several screen configurations have been trial fit and some filter elements are being looked at to determine their ability to keep out dirt and trash without restricting inlet flow. 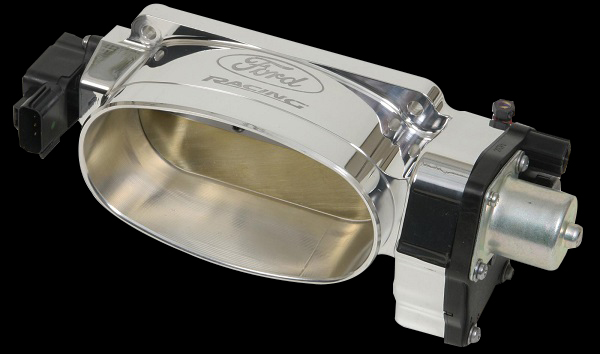 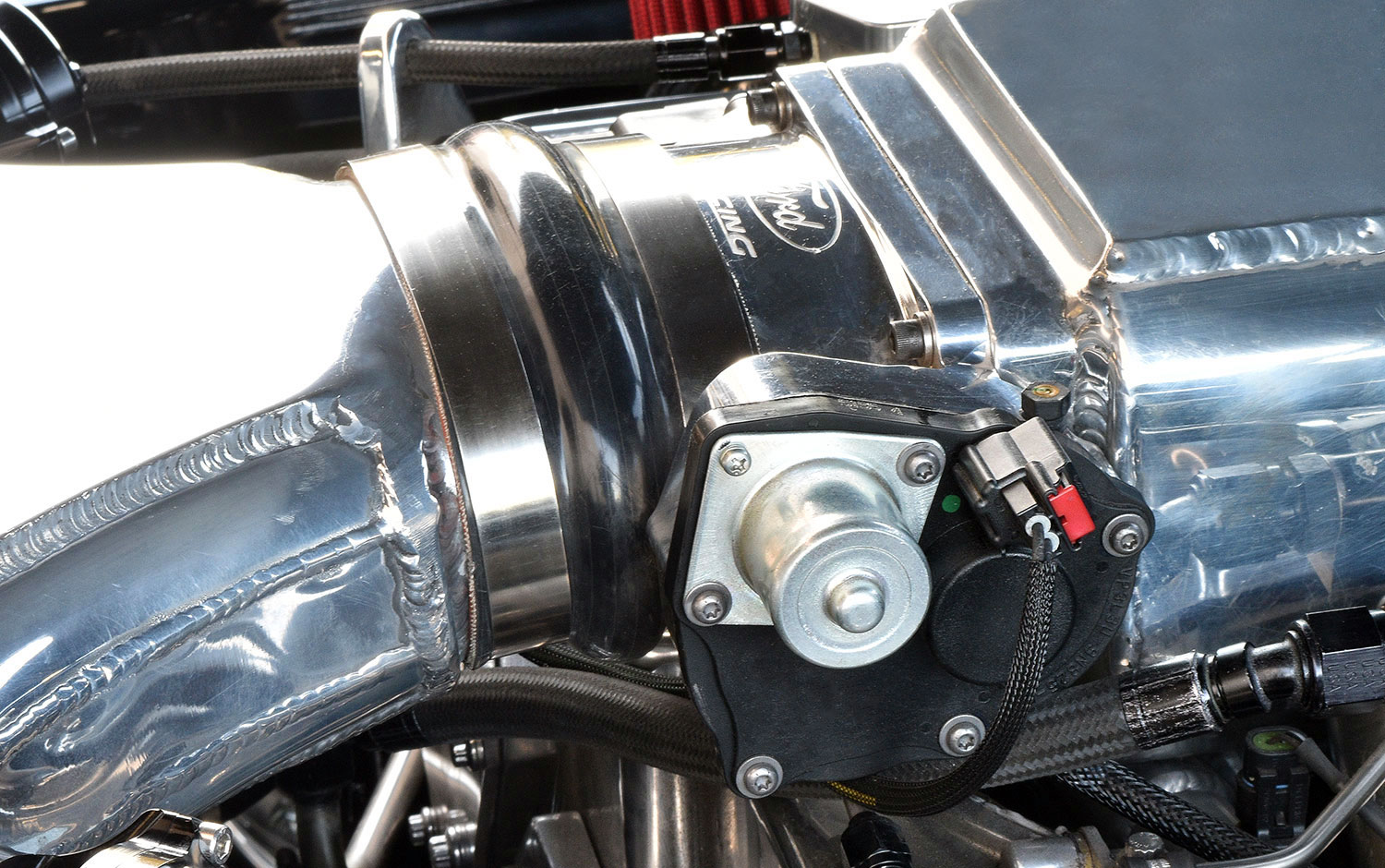 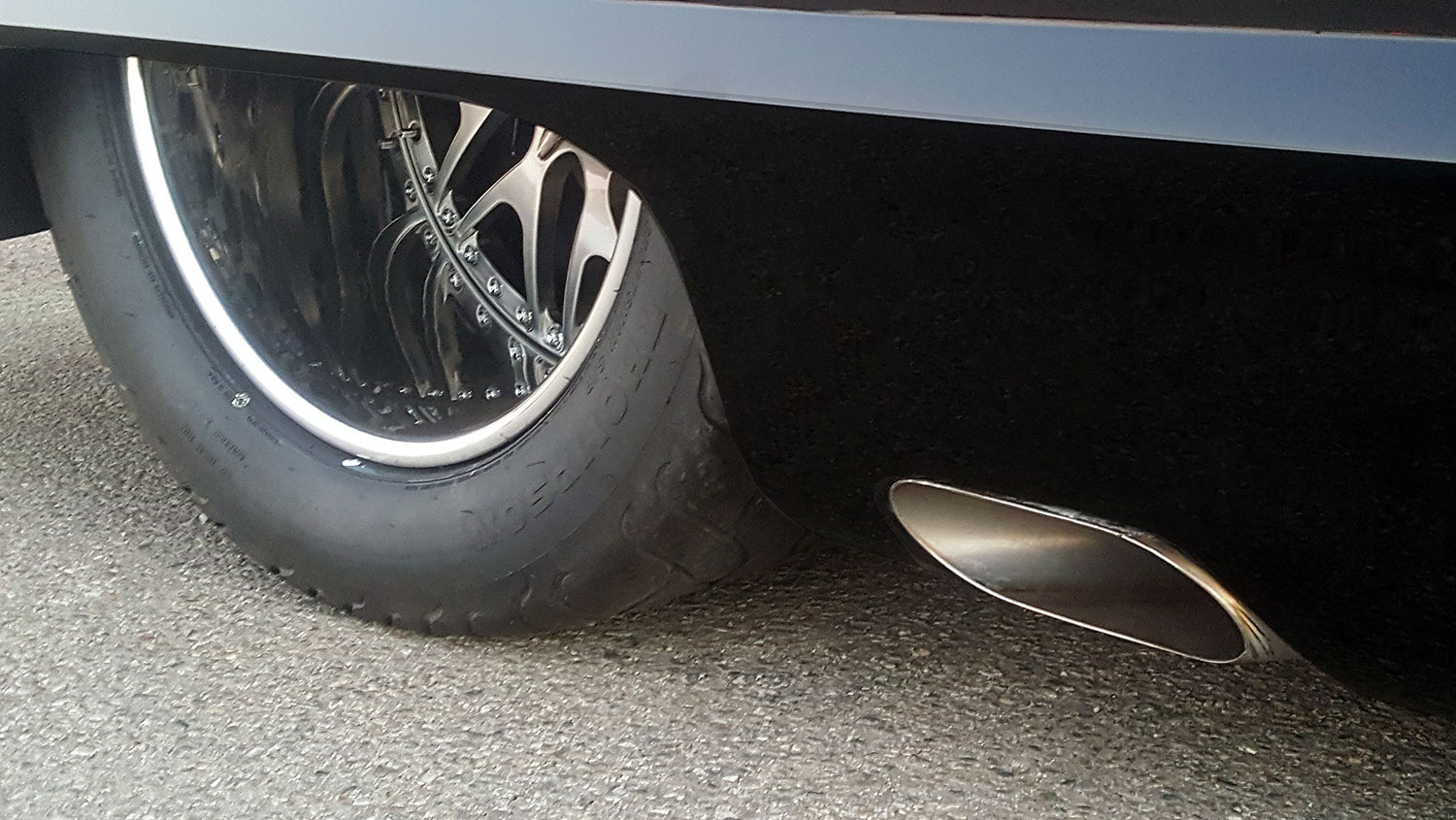 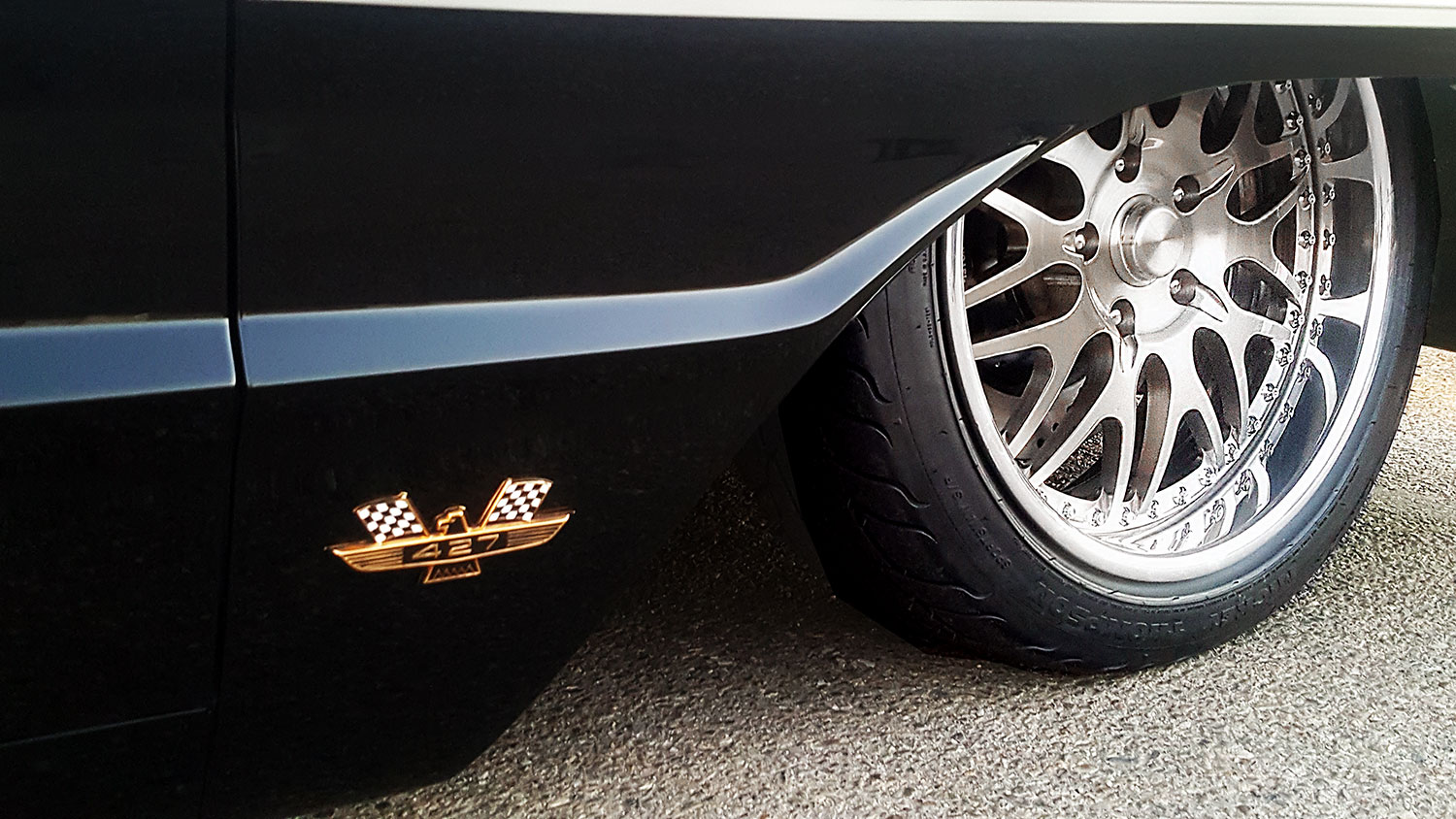 The exhaust treatment is subtle but highly functional, exiting ahead of the rear wheels, yet behind the drivers seat to allow windows down cruising if desired. Exhaust plumbing incorporated 3-inch tubing per side tapering to oval shaped side exits. 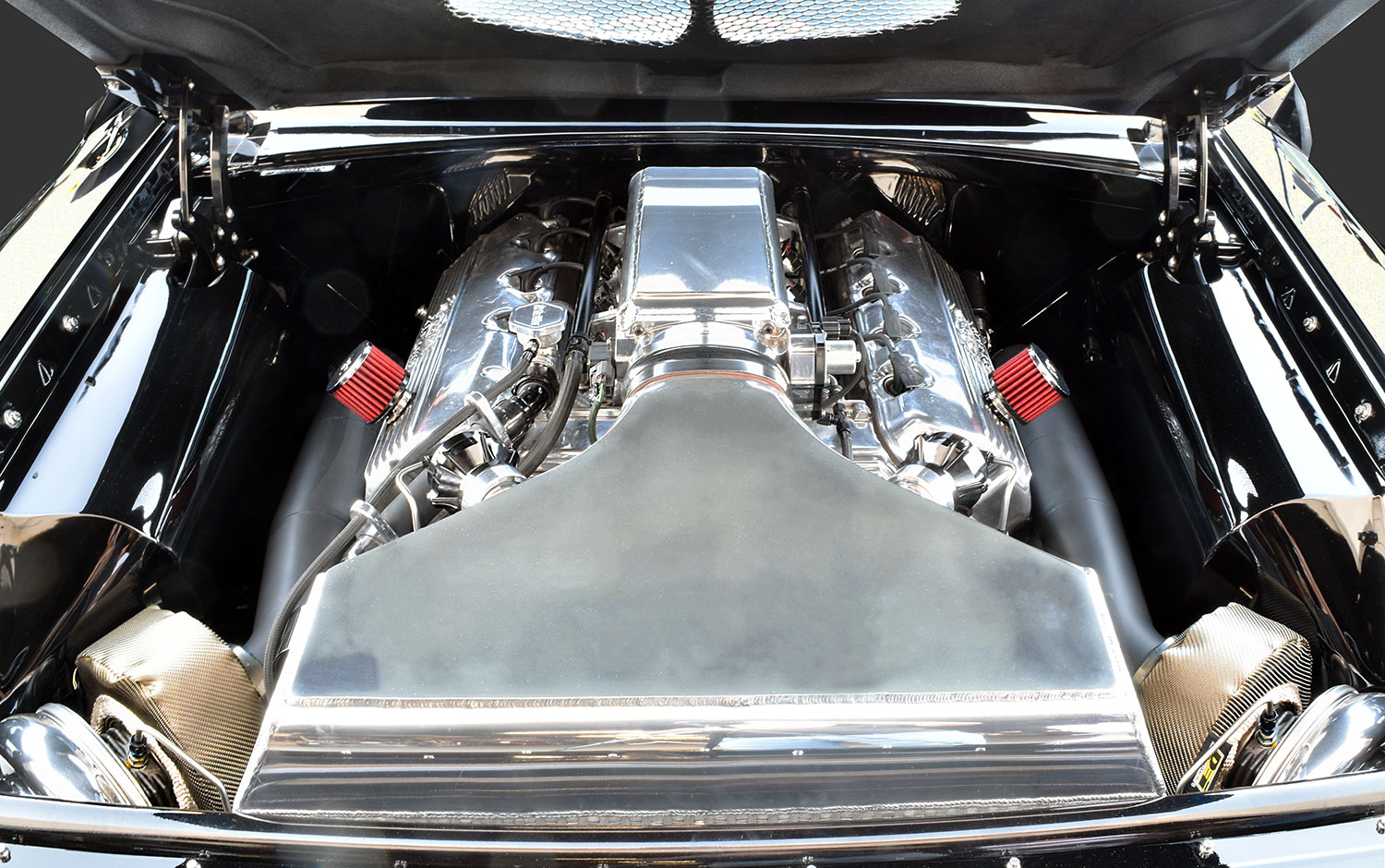 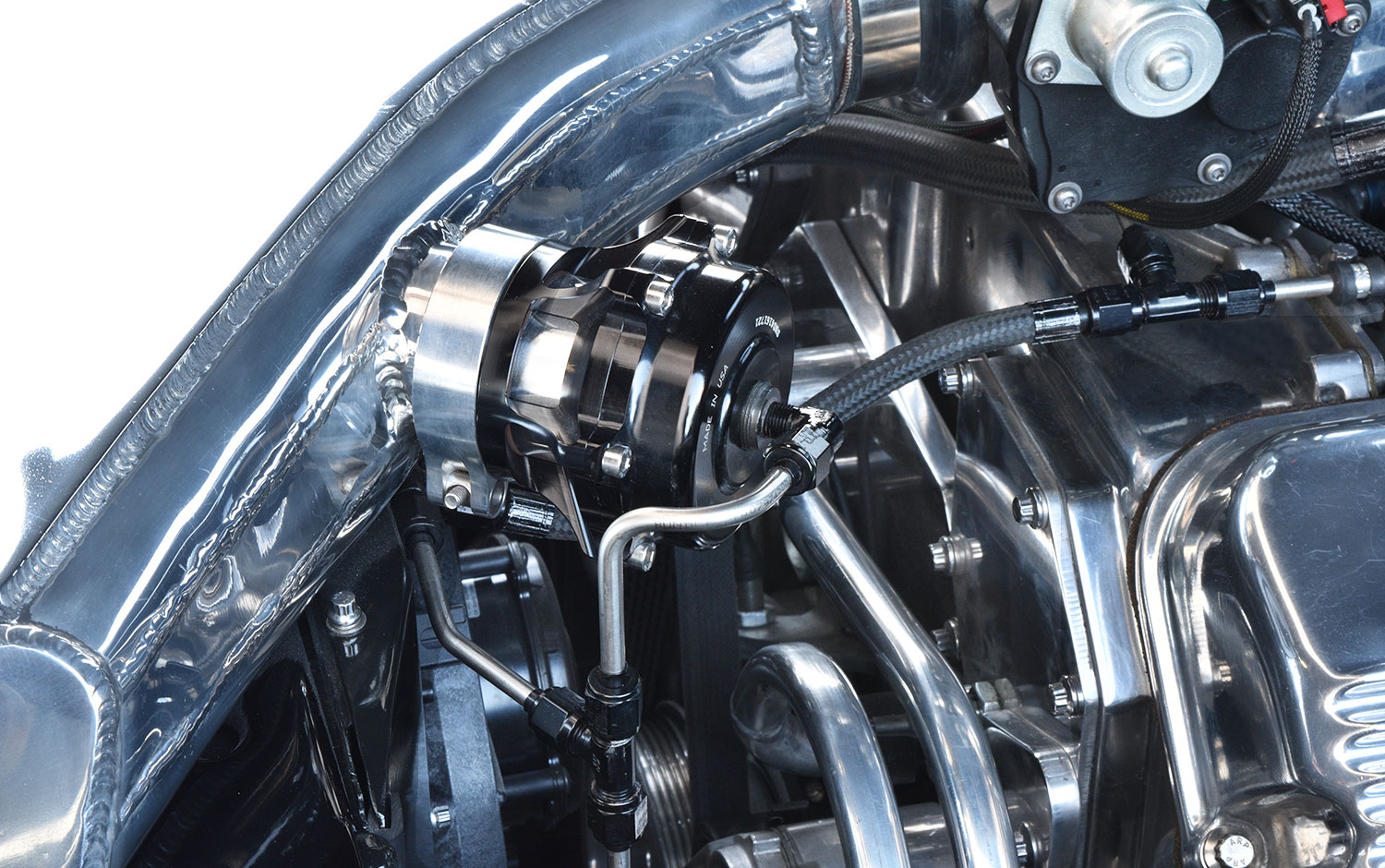 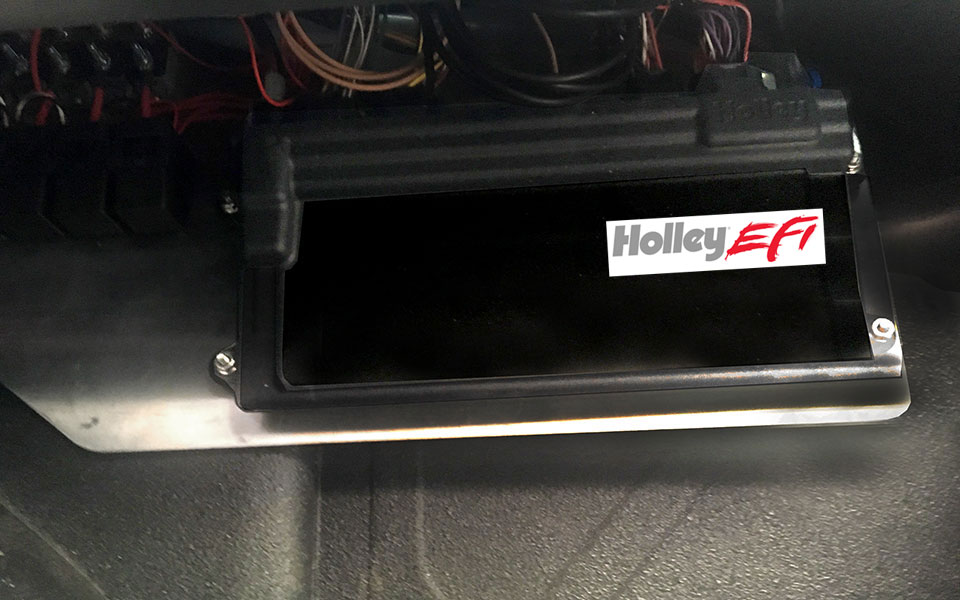 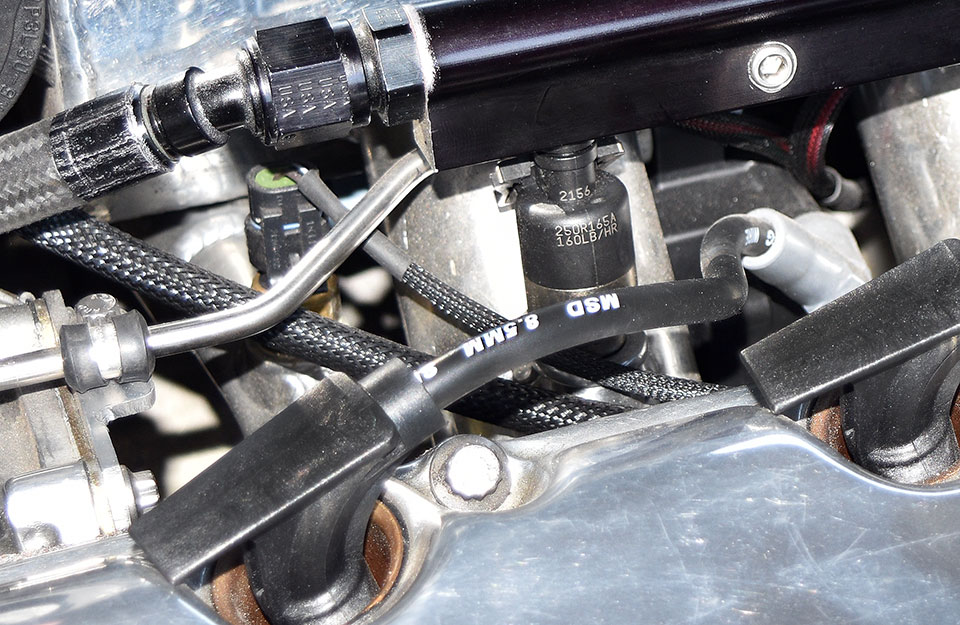 Quite a departure from your standard tunnel rams and roots blower combinations typical of Pro Street rides, but every bit as businesslike; Ring's Galaxie 500 packs death star power potential wrapped in galactic black and silver trim. Considered an unlikely candidate for Pro Street conversion, the finished product has Alternate Supercar written all over it; The wheels skirt the edge of the trend toward oversized wheels that look wrong, but they work perfect in this application. The hood scoop is a respectful nod to the Galaxie's performance past and the Cammer under the hood is the perfect powerplant to represent Ford's performance heritage on the Pro Street stage. A different approach to be sure, but one that fits the intent and looks the part.

1964 was the final year of this body style The body was refined to a sculpted look which was actually intended to aid the aerodynamics for NASCAR where it was hoped that the Cammer engine would prevail. It was banned and found a home in drag racing. The standard 427ci (7.0 l) engine was used in 50 lightweight fiberglass-equipped cars for drag racing and the Cammer versions found their way into A/FX cars, Funny Cars and some Top Fuel cars. Would you have bought a Galaxie back in the day if it came with a Cammer and dual four barrel carbs? We would. 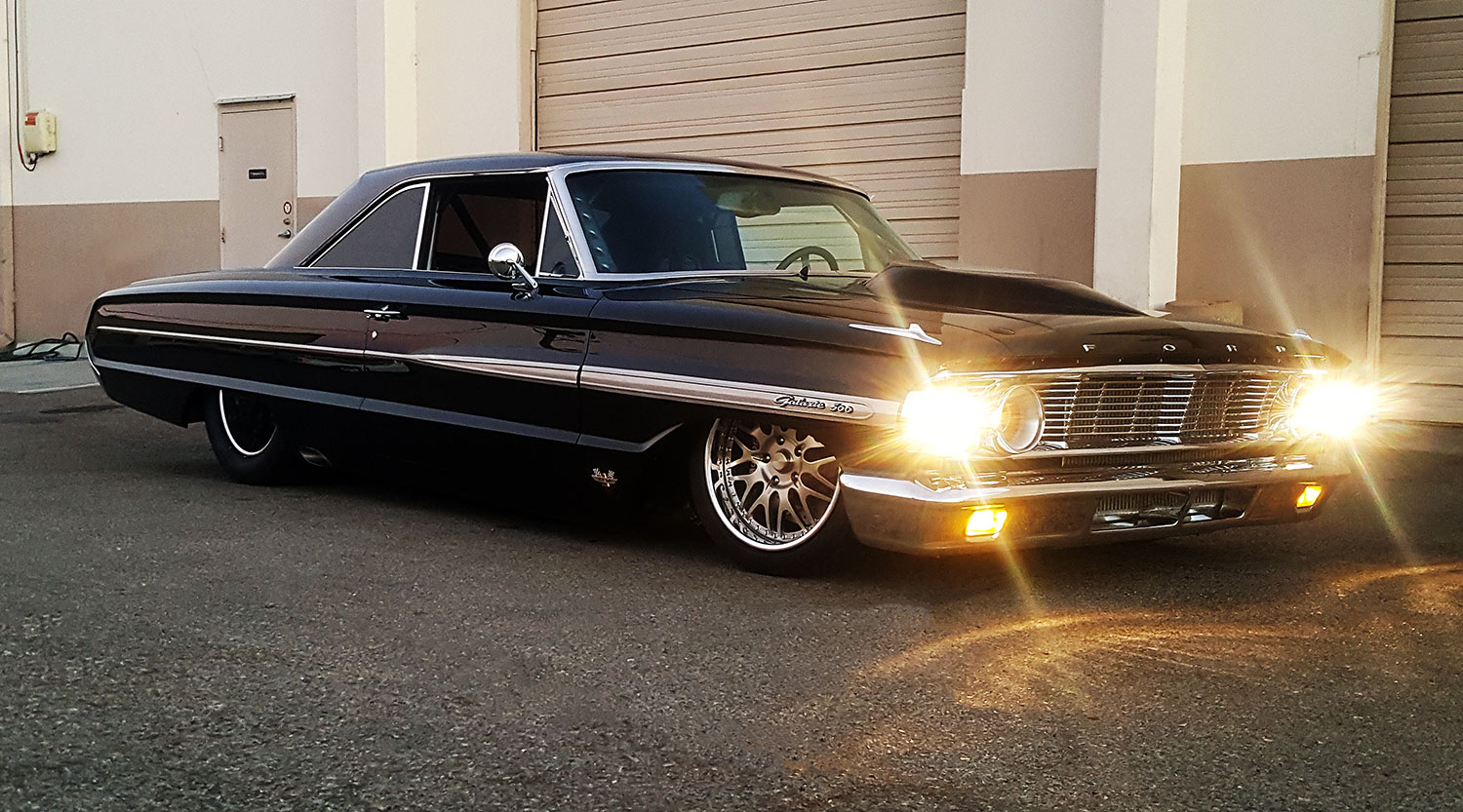 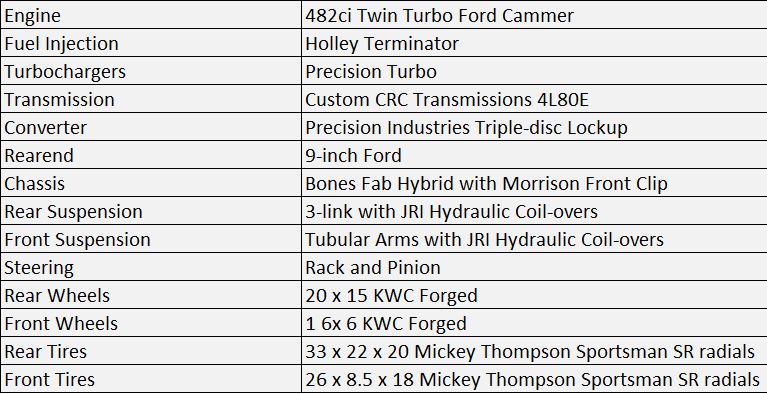 If you're attending the 2018 SEMA Show in Las Vegas this car is displayed in the Vibrant Performance booth. 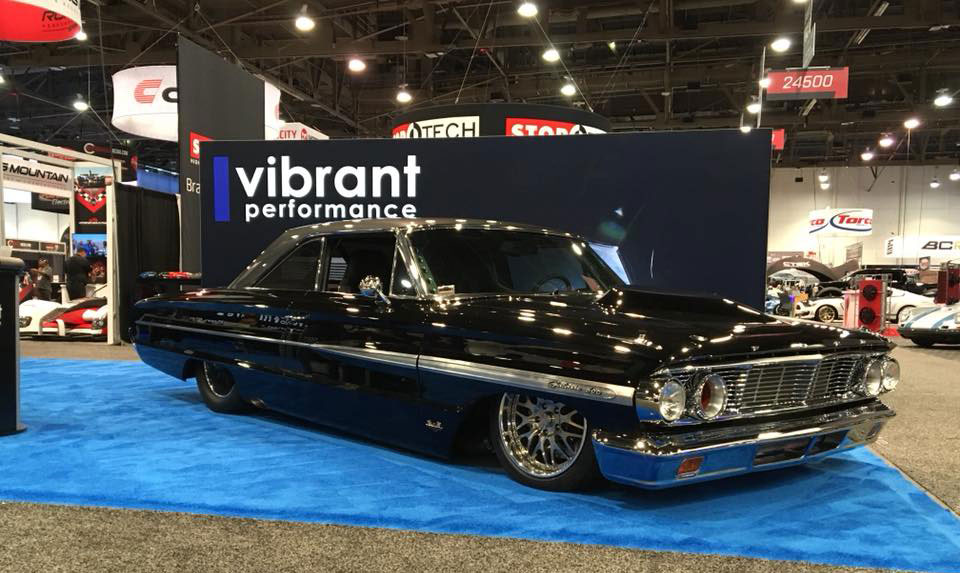