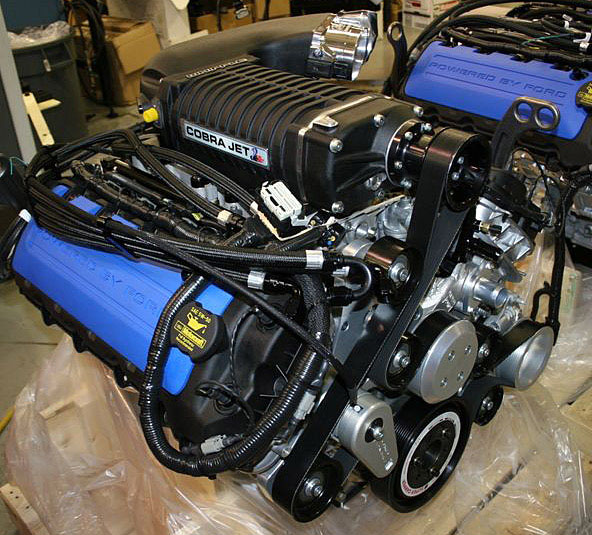 Ever wonder how carefully your Cobra Jet drag racing engine gets assembled at the factory? No doubt you've seen old newsreels with sweaty line workers ramming pistons into cylinder blocks on an endless conveyor line, or crankshafts hanging on hooks descending toward bare blocks waiting to mate. Well things have improved a bit since those days, particularly for Cobra Jet engines which are now hand assembled by a team of highly trained specialists who bring the love to every engine. 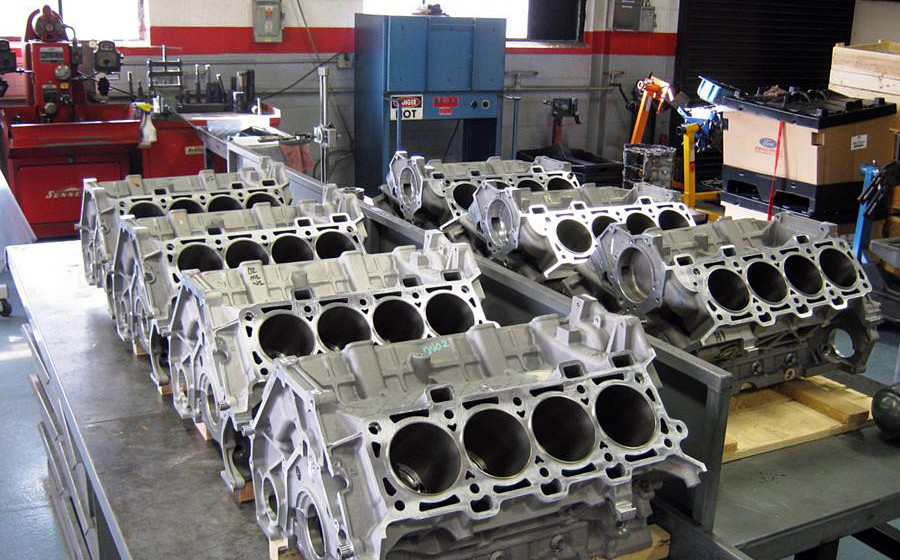 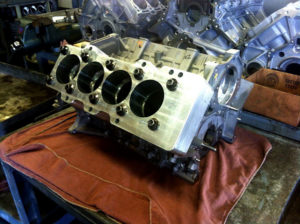 Each block is carefully re-inspected before it proceeds to assembly for dimensional verification of all components. All the prep work is completed ahead of the assembly line. The blocks are de-burred, torque plate honed, and then cleaned in a high-pressure wash tank and rinsed and dried with compressed air. Please! How many production engines do you think ever get honed with torque plates? The complete rotating assembly is cleaned, measured and all critical clearances are calculated and recorded on a paper traveler prior to routing for assembly. All the parts are staged on a cart which is serialized and must be scanned and matched to the mating block before assembly is allowed to take place on the line. Note the clip board in the photos. It has the traveler attached and the tech is measuring pistons and recording the diameter of each.Boosted street engines are easily susceptible to inadvertent damage brought on by excessive heat, and unavoidable variations in the quality of pump gas. Accordingly, Cobra Jet assemblers take great pains to ensure that all the components in your Cobra Jet engine meet the exact dimensional specs and clearances specified for these engines. These guys are not just assemblers. They perform all the same critical checks that your engine would receive it it were being built by a very reputable high performance engine shop. 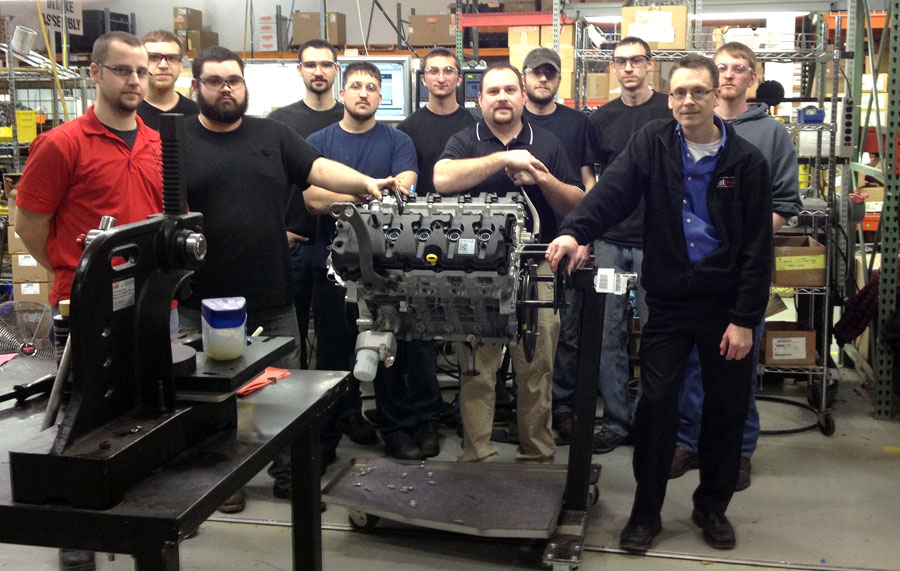 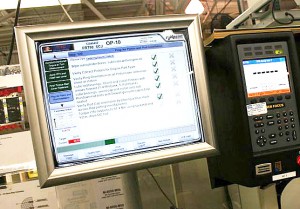 The PAS (Performance Assembly Solutions) build team works from computerized assembly stations that specify each step in the engine assembly. A checklist is provided on screen and the assembler must complete the steps and check them off before the assembly checklist will authorize proceeding to the next step. The green bar along the bottom of the touch screen represents how far along in the assembly process the assembler has progressed. Each of the small squares represents an individual assembly step and each must show “Green” before the technician is allowed to proceed onto the next. In the photo above you also see several of the verification activities the technician is required to conduct. This is where he electronically “signs off” that he has completed the work. The two black boxes to the right of the work station monitors are the controllers which run the fastening tools. One is used to run a 3/8 drive gun for the lower torque fasteners and the other runs a ½ inch drive gun for the high-torque fasteners. The number you see on the display is the final recorded torque (in Nm) for the last fastener that was tightened. 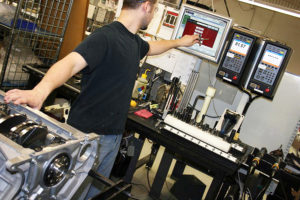 In the adjacent photo the build tech is verifying connecting rod side clearance and entering the actual measurement info into the touch-screen monitor at work station. His measurements must fall within specification limits or the system will not allow him to proceed further. The assembly section has the ability to program the entire engine line to suit the individual needs and requirements of any engine combination. A unique “build recipe” is programmed for each part type, including build sequence information, on-line work instructions and visual aids, integration of all fastening tooling, torque/angle limits and all all critical verification steps to ensure absolute accuracy. All the fastening tools are completely integrated and programmed so that they operate and torque the fasteners to the exact requirement, in the exact quantity, at every step of the operation. The operator reads the work instructions presented to him on the touch screen and he must acknowledge that he has completed each individual step by accepting it. His acknowledgement is stored in the database against his name so there is complete accountability throughout the process. When the fastening tools are required to be used he is prompted on the screen. He simply selects the socket, engages the fastener and pulls the trigger until the gun stops running. Visual and audible cues on the gun notify him that the fastener has reached the correct torque, and all torque and angle information is also stored in the database for every fastener. There are approximately 45 pages of assembly data for each engine. Every step of the assembly and test process is recorded and stored with that engine's serial number. 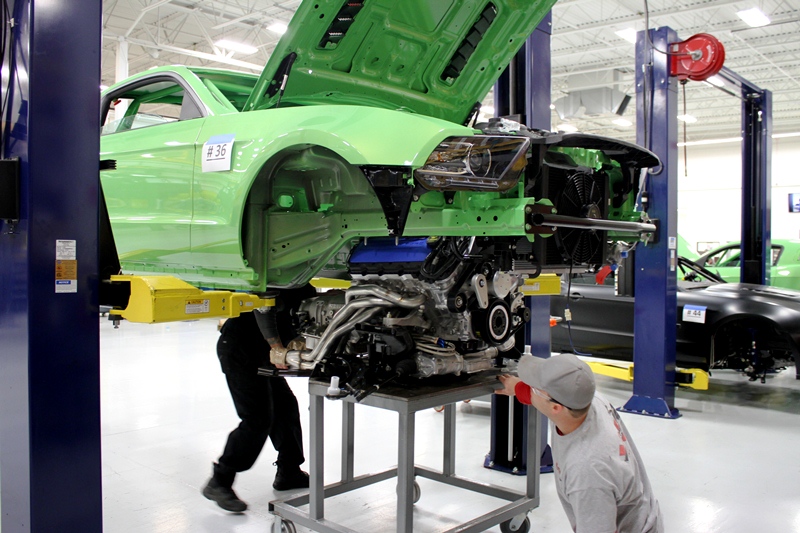 Cobra Jet engines are assembled with all the care and prep that goes into a full race engine. The build techs take great pride in every assembly and their names are permanently recorded and associated with every engine they build. Thirty years on when these cars become major icons, ardent collectors will no doubt go to extraordinary lengths to track down the original build sheet and find the builder to autograph it. 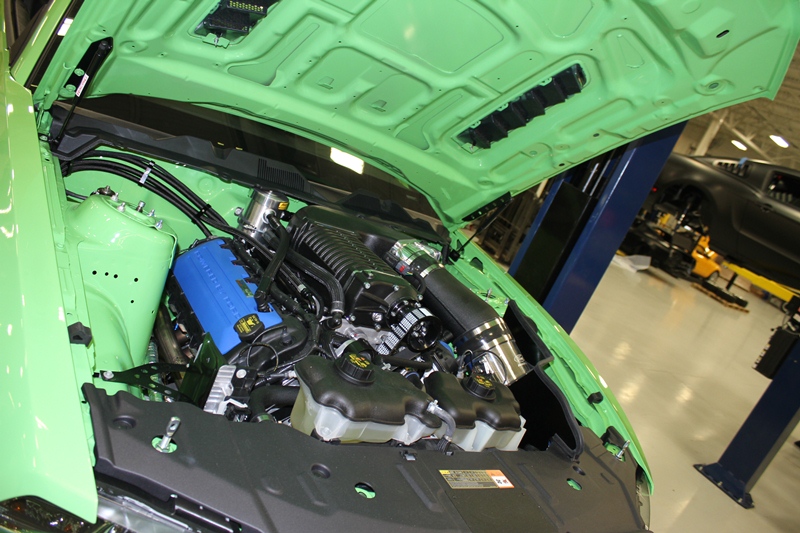 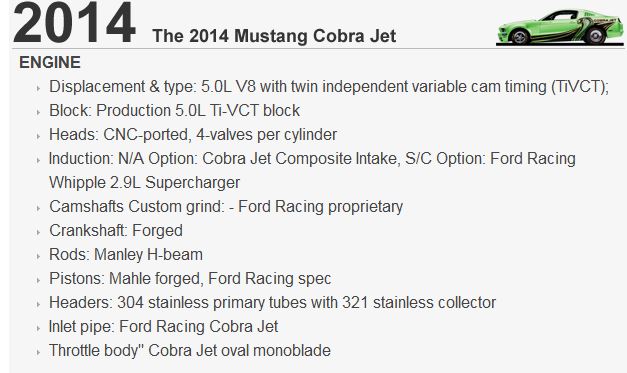