Bonneville: The Fastest Place on Earth 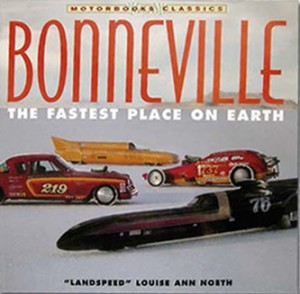 No one currently breathing is more qualified to narrate the history of landspeed racing at Bonneville than Louise Ann Noeth, aka “Landspeed Louise”. A gearhead from conception with an eye-watering load of nitro running through her veins, Landspeed is universally recognized as the foremost champion of the Bonneville Salt Flats and Bonneville racers in particular; never missing a chance to sing their praises promote their cause and chronicle their efforts. From the fastest streamliners to the slowest roadster or production car, every racer has a unique and compelling story and Louise reveals them all masterfully in her broadly acclaimed history of landspeed racing at Bonneville.

Who knew? For nearly a century ambitious men and women have journeyed to the isolated Bonneville Salt Flats to challenge the gods of speed in their very own cathedral. Sometimes the gods let them win; sometimes they killed them outright and those who died trying departed with respect and enduring honor from comrades still on course. Louise knows their story. She knows all of their stories because there is no finer or more dedicated researcher and writer of landspeed lore than Landspeed Louise. Fiercely loyal to landspeed racers, Louise digs deep to unearth enduring stories of man and machine against the laws of physics. Over the years she has peeked under every car, looked down every carburetor and ruffled many a feather, but the racers respect her; a few grudgingly, but they’re damned glad to have her on their side because she loves them one and all and bears no disrespect of their efforts or their personal stories.

Possessed of enormous heart and penetrating insight Louise unveils the story of Bonneville in perfect chronological order with a keen understanding of the men and women who devote their lives to the singular pursuit of impossibly high speeds. She details how the salt flats were created over centuries of geologic change, ultimately evolving into the world’s fastest race course that she fondly refers to as the “world’s largest natural dynamometer." The book tells about early visitors to the remote salt lake and how they came to understand the unique racing prospects it represented. It reveals how pioneer racers like the fabled Ab Jenkins established record after record while promoting the salt flats to other racers who eventually showed up to challenge his records. It chronicles monumental effort as Malcolm Campbell broke the 300 mph barrier and epic battles between John Cobb and George Eyston which ultimately pushed the land speed record ever closer to 400 mph. And it describes the astonishing jet powered combat of the mid sixties when speeds escalated to 500 and then 600 mph.

But most of all it tells the story of how a gritty bunch of determined hot rodders claimed it for themselves, racing on and caring for the salt for more than sixty years. It represents the purity of hot rodding and the universal drive to modify, improve and excel. It’s all that and more and Louise reveals its evolution in fascinating detail, paying particular attention to the many dedicated souls who made it happen and those who keep the fire burning. Most of hot rodding’s great personalities have raced at or somehow been involved with Bonneville and readers will recognize them in the many timeless photos Louise has uncovered. This is personal for Louise; a labor of love. And it shows in her carefully crafted work and the collective thanks of racers and enthusiasts everywhere.

Her award winning book is universally recognized as the gold standard of Bonneville racing literature and for a select few it gets even better. After several printings, Louise took the initiative and carted 49 of the last hardbound copies around to various shops, gathering the signatures of more than 100 famous Bonneville racing personalities next to their photos
or mention in the book. Unfortunately these special editions are all sold out, but paperback versions can still be purchased online and if you're very determined, you may be able to locate a copy through www.landspeedproductions.biz. Failing that, you can wait it out until the new version is published. Louise is currently putting the finishing touches on the next version which will feature an additional 100 pages bringing it current through the 2012 season. The publication date has not been specified, but, but we expect it sometime in 2013.  The current version is five star speed reading at its best and we expect the new one to set a Bonneville record in its own right. Don’t miss it. Vive la Salt!